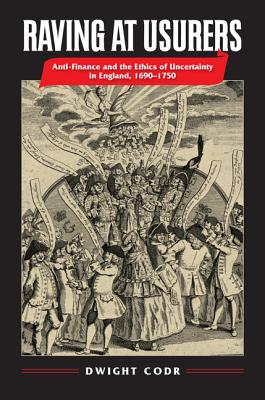 Anti-Finance and the Ethics of Uncertainty in England, 1690-1750

In Raving at Usurers, Dwight Codr explores the complex intersection of religion, economics, ethics, and literature in late seventeenth- and eighteenth-century England. Codr offers an alternative to the orthodox story of secular economic modernity's emergence in this key time and place, locating in early modern anti-usury literature an "ethic of uncertainty" that viewed economic transactions as ethical to the extent that their outcomes were uncertain. Codr's development of an "anti-financial" reading practice reveals that the financial revolution might be said to have grown out of--rather than in spite of--early modern anti-usury and Protestant ethics.

Beginning with the reconstruction of a major controversy provoked by the delivery of a sermon against usury in the financial heart of London, Codr goes on to show not only how the ethic at the core of the discourse surrounding usury in the eighteenth century was culturally mediated but also how that ethic may be used as a lens to better understand major works of eighteenth-century literature. Codr offers radically new perspectives on Daniel Defoe's Robinson Crusoe and Henry Fielding's Tom Jones, examining how these novels reacted to emergent financial ways of knowing and meaning as well as how the texts formally bear out the possibility of a truly open and uncertain future.

By reading the eighteenth century in terms of risk rather than certainty, Raving at Usurers offers a reassessment of what has been called the financial revolution in England and provides a revisionist account of the intimate connection between risk, ethics, and economics in the period.

Dwight Codr is Associate Professor of English at the University of Connecticut.
Loading...
or support indie stores by buying on