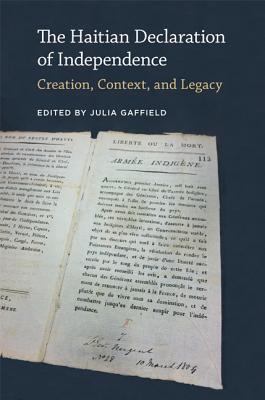 The Haitian Declaration of Independence

While the Age of Revolution has long been associated with the French and American Revolutions, increasing attention is being paid to the Haitian Revolution as the third great event in the making of the modern world. A product of the only successful slave revolution in history, Haiti's Declaration of Independence in 1804 stands at a major turning point in the trajectory of social, economic, and political relations in the modern world. This declaration created the second independent country in the Americas and certified a new genre of political writing. Despite Haiti's global significance, however, scholars are only now beginning to understand the context, content, and implications of the Haitian Declaration of Independence.

This collection represents the first in-depth, interdisciplinary, and integrated analysis by American, British, and Haitian scholars of the creation and dissemination of the document, its content and reception, and its legacy. Throughout, the contributors use newly discovered archival materials and innovative research methods to reframe the importance of Haiti within the Age of Revolution and to reinterpret the declaration as a founding document of the nineteenth-century Atlantic World.

The authors offer new research about the key figures involved in the writing and styling of the document, its publication and dissemination, the significance of the declaration in the creation of a new nation-state, and its implications for neighboring islands. The contributors also use diverse sources to understand the lasting impact of the declaration on the country more broadly, its annual celebration and importance in the formation of a national identity, and its memory and celebration in Haitian Vodou song and ceremony. Taken together, these essays offer a clearer and more thorough understanding of the intricacies and complexities of the world's second declaration of independence to create a lasting nation-state.

Julia Gaffield, author of Haitian Connections in the Atlantic World: Recognition after Revolution, is Assistant Professor of History at Georgia State University.
Loading...
or support indie stores by buying on