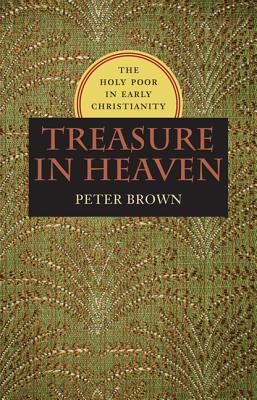 The "holy poor" have long maintained an elite status within Christianity. Differing from the "real" poor, these clergymen, teachers, and ascetics have historically been viewed by their fellow Christians as persons who should receive material support in exchange for offering immeasurable immaterial benefits--teaching, preaching, and prayer. Supporting them--quite as much as supporting the real poor--has been a way to accumulate eventual treasure in heaven. Yet from the rise of Christian monasticism in Egypt and Syria to present day, Christians have argued fiercely about whether monks should work to support themselves.

In Treasure in Heaven, renowned historian Peter Brown shifts attention from Western to Eastern Christianity, introducing us to this smoldering debate that took place across the entire Middle East from the Euphrates to the Nile. Seen against the backdrop of Asia, Christianity might have opted for a Buddhist model by which holy monks lived by begging alone. Instead, the monks of Egypt upheld an alternative model that linked the monk to humanity and the monastery to society through acceptance of the common, human bond of work. This model of Third World Christianity--a Christianity that we all too easily associate with the West--eventually became the basis for the monasticism of western Europe, as well as for modern Western attitudes to charity and labor. In Treasure in Heaven, Brown shows how and why we are still living--at times uncomfortably--with that choice.

Peter Brown, Emeritus Professor of History at Princeton University, is the author of The Ransom of the Soul: Afterlife and Wealth in Early Western Christianity and Through the Eye of a Needle: Wealth, the Fall of Rome, and the Making of Christianity in the West, 350-550 AD.
Loading...
or support indie stores by buying on