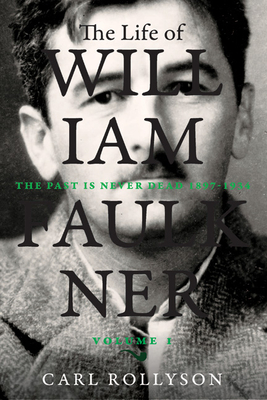 The Life of William Faulkner

William Faulkner emerged from the ravaged South--half backwoods, half defeated empire--transforming his corner of Mississippi into the fictional Yoknapatawpha County and bestowing on the world some of the most revolutionary and enduring literature of the twentieth century. The personal story behind the work has fascinated readers nearly as much as the great novels, but Faulkner has remained elusive despite numerous biographies that have attempted to decipher his private life and his wild genius. In an ambitious biography that will encompass two volumes, Carl Rollyson has created a life of Faulkner for the new millennium.

Rollyson has drawn on an unprecedented amount of material to present the richest rendering of Faulkner yet published. In addition to his own extensive interviews, Rollyson consults the complete--and never fully shared--research of pioneering Faulkner biographer Joseph Blotner, who discarded from his authorized biography substantial findings in order to protect the Faulkner family. Rollyson also had unrivaled access to the work of Carvel Collins, whose decades-long inquiry produced one of the greatest troves of primary source material in American letters.

This first volume follows Faulkner from his formative years through his introduction to Hollywood. Rollyson sheds light on Faulkner's unpromising, even bewildering youth, including a gift for tall tales that blossomed into the greatest of literary creativity. He provides the fullest portrait yet of Faulkner's family life, in particular his enigmatic marriage, and offers invaluable new insight into the ways in which Faulkner's long career as a screenwriter influenced his iconic novels.

Integrating Faulkner's screenplays, fiction, and life, Rollyson argues that the novelist deserves to be reread not just as a literary figure but as a still-relevant force, especially in relation to issues of race, sexuality, and equality. The culmination of years of research in archives that have been largely ignored by previous biographers, The Life of William Faulkner offers a significant challenge and an essential contribution to Faulkner scholarship.

Carl Rollyson, Professor Emeritus at Baruch College, The City University of New York, has published numerous biographies of literary figures such as Sylvia Plath, Susan Sontag, Lillian Hellman, Amy Lowell, Rebecca West, and Norman Mailer. His writing has appeared in the Wall Street Journal, the New Criterion, and the Washington Post.
Loading...
or support indie stores by buying on