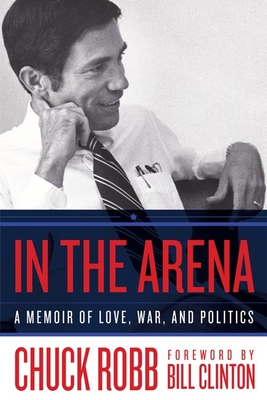 A Memoir of Love, War, and Politics

In December 1967, Chuck Robb was catapulted onto the national scene when he married Lynda Bird Johnson, the daughter of President Lyndon B. Johnson, in a nationally broadcast White House wedding. Shortly thereafter, Robb, a U.S. Marine, deployed to Vietnam, where he commanded India Company of the 3rd Battalion, 7th Regiment, and was awarded the Bronze Star. These two experiences--seemingly polar opposites--illustrate much about the eventual Virginia governor and U.S. senator, who combined a commitment to family with an ingrained sense of civic duty on the national stage.

In the Arena offers the first political memoir of the noted statesman's extraordinary life, tracing his path from early days as an anonymous Marine to his fairytale wedding, from night movements in Vietnam to engaging in the height of Democratic politics in the Virginia state capitol and U.S. Senate, and from experiencing personal highs and lows to becoming a principled fighter and exemplar of today's moderate Democrat.

Despite representing a conservative state, he stood up for a woman's right to choose, the Equal Rights Amendment, the constitutionality of flag burning, gay rights, and gun control. As governor, Robb raised the education budget by over $1 billion and appointed a record number of women and minorities to state positions, including the first African American to the Virginia Supreme Court. In 1996, in his second term in the Senate, he was the only southern senator to vote against the Defense of Marriage Act, the legislation banning gay marriage, calling the movement to end this discrimination a "fight for civil and human rights." Progressive on social issues, he was fiscally conservative and pro-national security, going on to co-chair the 2006 WMD Commission under George W. Bush. Looking back from our deeply partisan era, Robb's independent approach now seems remarkable, as well as instructive.

Full of honest reflections, In the Arena pulls back the curtain on one of America's proven political leaders and reveals the surprisingly colorful story of his career, marriage, and life.