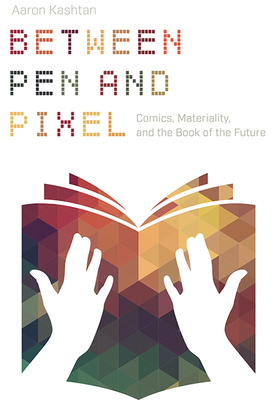 Between Pen and Pixel (Paperback)

Comics, Materiality, and the Book of the Future (Studies in Comics and Cartoons )

In Between Pen and Pixel: Comics, Materiality, and the Book of the Future, Aaron Kashtan argues that paying attention to comics helps us understand the future of the book. Debates over the future of the book tend to focus on text-based literature, particularly fiction. However, because comics make the effects of materiality visible, they offer a clearer demonstration than prose fiction of how the rise of digital reading platforms transforms the reading experience. Comics help us see the effects of alterations in features such as publication design and typography, whereas in print literature, such transformations often go unnoticed.

With case studies of the work of Alison Bechdel, Matt Kindt, Lynda Barry, Carla Speed McNeil, Chris Ware, and Randall Munroe, Kashtan examines print comics that critique digital technology, comics that are remediated from print to digital and vice versa, and comics that combine print and digital functionality. Kashtan argues that comics are adapting to the rise of digital reading technologies more effectively than print literature has yet done. Therefore, looking at comics gives us a preview of what the future of the book looks like. Ultimately, Between Pen and Pixel argues that as print literature becomes more sensitive to issues of materiality and mediacy, print books will increasingly start to resemble to comic books.


Praise For Between Pen and Pixel: Comics, Materiality, and the Book of the Future (Studies in Comics and Cartoons )…

“By linking a focus on materiality within texts to larger developments in the comics industry, Kashtan gives us a vivid portrait of a medium in transition. Between Pen and Pixel offers a powerful model for how methodologies focused on materiality might advance the field of comic studies.” —Henry Jenkins, author of Convergence Culture: Where Old and New Media Collide

“This book goes beyond just a survey of interesting experiments in comics materiality. It makes a bolder claim for the centrality of comics for book culture as a whole in the digital age.” —Greg Smith, author of What Media Classes Really Want to Discuss
or support indie stores by buying on
Copyright © 2020 American Booksellers Association