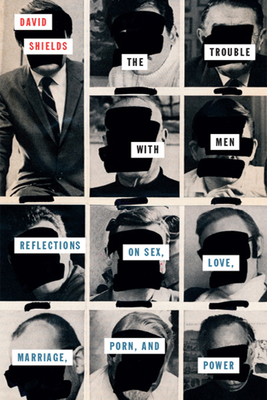 The Trouble with Men

“I often found this book beguiling, and moving. There is always the temptation, in writing about sex, to sound superior, arch, immune to its power. But Shields writes from a place of genuine curiosity and confusion. He is ridiculous and brave, he never conflates sincerity with genuine candor, and he poses the kinds of questions that only ever bring trouble (and are the only kind worth reading about).” —Parul Sehgal, The New York Times

“By book’s end, we realize that Shields himself is a collage, coming to us in bits and pieces, slipping in and out of the words of others, offering up questions but few answers, forcing us to read between the lines. Many men operate this way, elusive, mute, masked. But Shields wants to be unmasked, to be real even if that means appearing weak or ugly. . . Shields’s brave honesty stands alone.” —Sibbie O’Sullivan, The Washington Post

“Some books you hope will never end. This wasn’t one of those. Some books you wish you never began reading. This wasn’t one of those either. ‘Do you love this book? Do you hate it?’ you ask in the closing pages. Yes, I do. . . . It isn’t the book’s toxic masculinity I hate. Masculinity is most toxic when it’s in denial. Your book denies nothing. It’s the fidelity of the mirror that it offers to a reader like me: that’s what I love and hate. . . . Your book is an invitation: shall we be companions in misery? Of course some readers won’t accept the invitation, but I suspect that is their loss. The Trouble with Men is not for polite company, but the company that actually sustain us is rarely polite since it turns on being frank.” —John Kaag, Los Angeles Review of Books

“In the best Rousseauesque tradition of confessionalism, the person most shamingly exposed is the author. It’s brave of Shields to parade himself as cravenly as he does, and he covers a lot of ground along the way. . . . What gives the book its frisson is the sound of an intellectual talking dirty. High/low; private/public: the demarcations disappear. Above all, there’s his curiosity and his openness.” —Blake Morrison, The Guardian


“In this bold mixture of stark honesty and humor, Shields . . . ponders how sex, love, attraction, and power all coalesce to both fortify and complicate the human mating experience. . . . Entertaining and contemplative, Shields offers focused philosophy and effervescent wisdom on some of society’s knottiest topics.” —Kirkus Reviews


“Shields does all this using his trademark technique of appropriating and collaging text from other writers, including himself, and laying it out in a way that creates a new form of narrative, one that is both unfailingly personal and yet still manages to render everything—the reader included—a part of everything else. Which is both sobering and electrifying.” —Cathy Alter, Guernica

David Shields is the internationally best-selling author of twenty books, including Reality Hunger (named one of the best books of 2010 by more than thirty publications), The Thing About Life Is That One Day You’ll Be Dead (New York Times bestseller), Black Planet (finalist for the National Book Critics Circle Award), and Other People: Takes & Mistakes (NYTBR Editors’ Choice selection). The film adaptation of I Think You’re Totally Wrong: A Quarrel was released by First Pond Entertainment in 2017. A recipient of Guggenheim and NEA fellowships and a senior contributing editor of Conjunctions, Shields has published essays and stories in the New York Times Magazine, Harper’s, Esquire, Yale Review, Salon, Slate, McSweeney’s, and Believer. His work has been translated into two dozen languages.
Loading...
or support indie stores by buying on