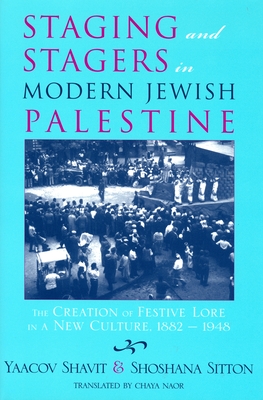 The Creation of Festive Lore in a New Culture, 1882-1948 (Raphael Patai Series in Jewish Folklore and Anthropology)

This fascinating case study describes the work of the people responsible for creating festive lore and its system of ceremonies and festivities--an inseparable part of every culture. In the case of the new modern Hebrew culture of Eretz Israel (modern Jewish Palestine)--a society of immigrants that left behind most of their traditional folkways--the creation of festival lore was a conscious and organized process guided by a national ideology and aesthetic values. This creative effort in a secular national society served as an alternative to the traditional religious system, adapted the ceremonies and festivals to a new historical reality, and created a new festival cycle that would give expression and joy to the values and symbols of the new Jewish society.

Staging and Stagers in Modern Jewish Palestine claims that the system of ceremonies and festivals, in general, and each separate ceremony and festival were staged according to the staging instructions written by a defined group of cultural activists. The book examines three main stages--the educational network, rural society (particularly the cooperative sector), and urban society (most notably Tel Aviv)--and looks at the stagers themselves, who were schoolteachers, writers, artists, and cultural activists. Though cultural systems of festivals and ceremonies are often researched and described, scholarly literature rarely identifies their creators or studies in detail the manner in which these systems are created. Staging and Stagers in Modern Jewish Palestine sheds important light on the stagers of modern Jewish Palestine and also on the processes and mechanisms that created the performative lore in other cultures, in ancient as well as modern times.

Yaacov Shavit is professor for the Department of the History of the Jewish People at Tel-Aviv University. Among his recent publications are History in Black: African-Americans in Search of an Ancient Past (Frank Cass: London, 2001) and The War of the Tablets: The Defense of the Bible in the 19th Century and the Babel-Bible Controversy (Am Oved: Tel-Aviv, 2003 [In Hebrew]).Shoshana Sitton is senior lecturer at the Levinsky College of Education, Tel Aviv. She is author of Education in the Spirit of the Homeland: The Curriculum of the Teachers Council for the Keren Kayement (Tel Aviv University, 1998 [In Hebrew]).
or support indie stores by buying on
Copyright © 2020 American Booksellers Association