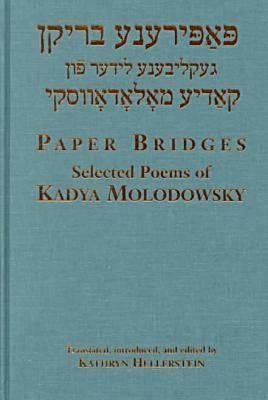 Kadya Molodwsky (1894-1975) was among the most accomplished and prolific of modern Yiddish poets, having published six major books of poetry, as well as fiction, plays, essays, and children's tales. This is a retrospective survey of her poetry and a book-length translation of her work into English. The introduction discusses her place in Yiddish poetry, with annotations on the poems, and a section of photographs.

Kadya Molodowsky (1894-1975) was among the most accomplished and prolific of modern Yiddish poets. Between 1927 and 1974, she published six major books of poetry, as well as fiction, plays, essays, and children's tales. Molodowsky participated in nearly every aspect of Yiddish literary culture that existed in her lifetime, first in Poland, where she lived until 1935, when she emigrated, and then in America. Before her emigration, Molodowsky taught young children in the Yiddish schools of Warsaw. In New York, she supported herself by writing for the Yiddish press and founded a literary journal, Svive (Surroundings), which she edited for nearly thirty years. Briefly during the early 1950s, Molodowsky wrote and edited Yiddish publications in the new state of Israel. She returned there in 1971 to receive the Itzik Manger Prize, the most prestigious award in Yiddish letters. Kathryn Hellerstein is a lecturer in Yiddish language and literature in the Department of Germanic Languages and the Jewish Studies Program at the University of Pennsylvania.
Loading...
or
Not Currently Available for Direct Purchase