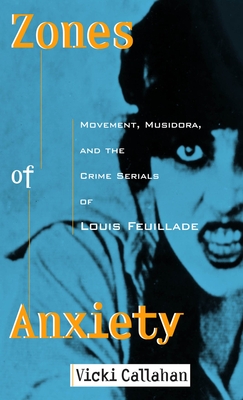 Movement, Musidora, and the Crime Serials of Louis Feuillade (Contemporary Approaches to Film and Television)

The crime serials by French filmmaker Louis Feuillade provide a unique point of departure for film studies, presenting modes rarely examined within early cinematic paradigms. Made during 1913 to 1920, the series of six films share not only a consistency of narrative structure and style but also a progressive revelation of the criminal threat-a dislocation of both cinematic and ideological subjectivity-as it shifts realms of social, cultural, and aesthetic disturbance. Feuillade's work raises significant questions of cinema authorship, film history, and film aesthetics, all of which are examined in Vicki Callahan's groundbreaking work Zones of Anxiety, the first study to address the crime serials of Louis Feuillade from a feminist perspective.

Zones of Anxiety merges cultural history and feminist film theory, arguing for a different kind of film history, a "poetic history" that is shaped by the little-examined cinematic mode of "uncertainty." Often obscured by film technique and film historians, this quality of uncertainty endemic to the cinema comes in part from the formal structures of repetition and recursion found in Feuillade's serials. However, Callahan argues that uncertainty is also found in the "poetic body" of the actress Musidora who is featured in two of the serials. It is the mobility of the Musidora figure-socially, culturally, sexually, and textually-that makes her a powerful image and also a place to view the historical blind spots of film studies and feminist studies with regard to questions of race, class, and sexuality.

Callahan's substantial focus on archival research builds a foundation for a host of compelling arguments for a new feminist history of film. Other studies have touched on the issue of gender in early cinema, though until now neither Feuillade's work nor French silent film have been examined in light of feminist film theory and history. Zones of Anxiety opens up the possibility of alternate readings in film studies, illuminating our understanding of subjectivity and situating a spectatorship that acknowledges social and cultural differences.

Vicki Callahan is associate professor of film in the Peck School of the Arts at the University of Wisconsin-Milwaukee.
or support indie stores by buying on
Copyright © 2020 American Booksellers Association