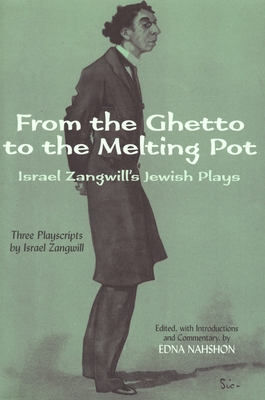 From the Ghetto to the Melting Pot

In his historic play The Melting Pot, Israel Zangwill (1864-1926) introduced into our discourse a potent metaphor that for nearly a hundred years has served as a key definition of the United States. The play, enthusiastically espoused by President Theodore Roosevelt, to whom it was dedicated, offered a grand vision of America as a dynamic process of ethnic and racial amalgamation. By his own admission, The Melting Pot grew out of Zangwill's intense involvement in issues of Jewish immigration and resettlement and was grounded in his interpretation of Jewish history.

Zangwill, Anglo Jewry's most renowned writer, began writing seriously for the stage in the late 1890s. At the time, the negative stereotype of the so-called Stage Jew was still deeply entrenched in the theatrical mainstream, so much so that Jewish playwrights writing for the English-language stage avoided altogether the portrayal of Jewish life. Zangwill shattered this silence in 1899 with the American premiere of Children of the Ghetto--his first full-length drama, and the first English-language play devoted in its entirety to the depiction of Jewish life in an authentic and positive fashion. The play's groundbreaking production drew tremendous attention and generated heated debates, but since the script was never published, the memory of the passions it generated dimmed, and its whereabouts eventually became unknown. After more than a century, theater historian Edna Nahshon has discovered the original manuscript of this milestone text, as well as that of another unpublished Zangwill play, The King of Schnorrers, and the original version of The Melting Pot. Nahshon brings these three works together in print for the first time in From the Ghetto to the Melting Pot.

Edna Nahshon's in-depth introduction to this volume includes a biography of Israel Zangwill that especially pertains to these works and situates them within the Anglo-American theater of the time. The essays preceding each play provide rich and hitherto unknown information on the scripts, their stage productions, and their popular and critical reception. While some issues addressed in From the Ghetto to the Melting Pot are uniquely Jewish, others are universal and typical of the negotiation of self-presentation by ethnic and minority groups, particularly within the American experience.

Edna Nahshon is associate professor of Hebrew at the Jewish Theological Seminary of America. She has written extensively on Jewish theater and is the author of Yiddish Proletarian Theatre: The Art and Politics of the Artef, 1925-1940 (Greenwood, 1998).
Loading...
or support indie stores by buying on