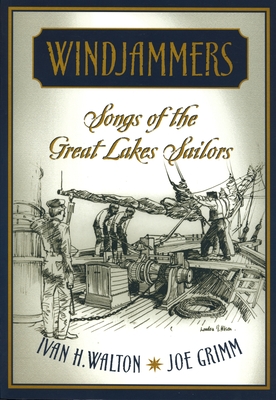 White-winged schooners once dominated commerce and culture on the Great Lakes, and songs relieved the hours on board, but that way of life and its music ended when steam-driven mechanical boats swept schooners from the inland seas. Recognizing in the late 1930s, almost too late, that this rich oral tradition was going to the grave along with the last generation of schoonermen, Ivan H. Walton undertook a quest to save the songs of the Great Lakes sailors. Racing time and its ravages, he searched out ancient mariners in lakefront hospitals, hangouts, and watering holes. Walton reconstructed songs from one of the most colorful periods in American history, discovering melodies and lyrics to more than a hundred songs. With its stories, lyrics, musical scores by folksinger/historian Lee Murdock, Windjammers ensures that sailing chanteys that have not been heard for over one hundred years can be heard again and again far into the future. An audio supplement is available for download at www.wsupress.wayne.edu/books/detail/windjammers.

Ivan Walton was a professor of American literature at the University of Michigan and the leading authority on Great Lakes folklore. During his lifetime he collected a vast body of information and prepared notes for an anthology of the songs and lore of Great Lakes sailors, a work that was unpublished at the time of his death in 1968.Joe Grimm is recruiting and development editor for the Detroit Free Press. He is also the author of Michigan Voices: Our State's History in the Woods of the People Who Lived It (Wayne State University Press, 1987).
or
Buy Here
Copyright © 2020 American Booksellers Association