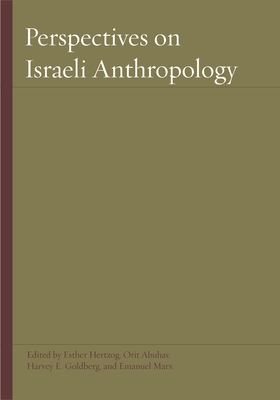 While Israel is a small country, it has a diverse and continually changing society. As a result, since the 1960s Israeli anthropology has been a fertile ground for researchers. This collection introduces readers to the diverse field of social anthropology in Israel today, pointing to both its rich history and promising future. Drawing upon recent research as well as a few key older articles, editors Esther Hertzog, Orit Abuhav, Harvey E. Goldberg, and Emanuel Marx have selected contributors that highlight different theoretical perspectives and touch on a variety of relevant topics.

Perspectives on Israeli Anthropology begins with an introduction that traces the development of social anthropology in Israel from its beginnings in Palestine prior to Israeli statehood to the present. The essays in this volume are divided into five major thematic sections, including the effects of immigration, the influence of bureaucracies in social life, the negotiation of the social order, tensions between Jewish Israelis and Palestinian Arabs, and notions of "Israeliness" and "Jewishness." Essays offer compelling research and a variety of perspectives on changing senses of identity, ethnicity, religiosity, and gender relations in a society deeply affected by war, violence, and dispossession. While the contributors in this volume adhere to various theoretical and ethnographic traditions, they all treat Israel as a complex, modern, and open society with much to offer other scholars. Perspectives on Israeli Anthropology will provide an illuminating overview of the discipline for students, teachers, and researchers in the field of social anthropology.