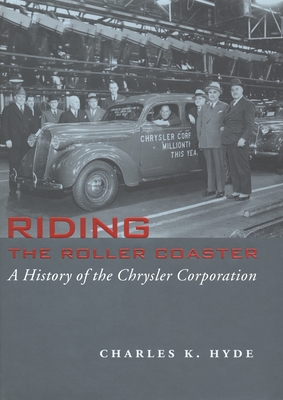 A History of the Chrysler Corporation (Great Lakes Books)

From the Chrysler Six of 1924 to the front-wheel-drive vehicles of the 70s and 80s to the minivan, Chrysler boasts an impressive list of technological "firsts." But even though the company has catered well to a variety of consumers, it has come to the brink of financial ruin more than once in its seventy-five-year history.

How Chrysler has achieved monumental success and then managed colossal failure and sharp recovery is explained in Riding the Roller Coaster, a lively, unprecedented look at a major force in the American automobile industry since 1925. Charles Hyde tells the intriguing story behind Chrysler-its products, people, and performance over time-with particular focus on the company's management. He offers a lens through which the reader can view the U.S. auto industry from the perspective of the smallest of the automakers who, along with Ford and General Motors, make up the "Big Three."

The book covers Walter P. Chrysler's life and automotive career before 1925, when he founded the Chrysler Corporation, to 1998, when it merged with Daimler-Benz. Chrysler made a late entrance into the industry in 1925 when it emerged from Chalmers and Maxwell, and further grew when it absorbed Dodge Brothers and American Motors Corporation. The author traces this journey, explaining the company's leadership in automotive engineering, its styling successes and failures, its changing management, and its activities from auto racing to defense production to real estate. Throughout, the colorful personalities of its leaders-including Chrysler himself and Lee Iacocca-emerge as strong forces in the company's development, imparting a risk-taking mentality that gave the company its verve.