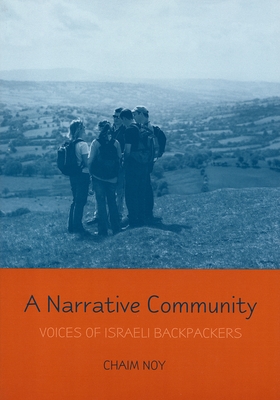 Backpacking, or Tarmila'ut, has been a time-honored rite of passage for young Israelis for decades. Shortly after completing their mandatory military service, young people set off on extensive backpacking trips to "exotic" and "authentic" destinations in so-called Third World regions in India, Nepal, and Thailand in Asia, and also Colombia, Ecuador, Peru, Brazil, Chile, and Argentina in Central and South America. Chaim Noy collects the words and stories of Israeli backpackers to explore the lively interplay of quotations, constructed dialogues, and social voices in the backpackers' stories and examine the crucial role they play in creating a vibrant, voiced community.

A Narrative Community illustrates how, against the peaks of Mt. Everest, avalanches, and Incan cities, the travelers' storytelling becomes an inherently social drama of shared knowledge, values, hierarchy, and aesthetics. Based on forty-five in-depth narrative interviews, the research in this book examines how identities and a sense of belonging emerge on different social levels-the individual, the group, and the collective-through voices that evoke both the familiar and the Other. In addition, A Narrative Community makes a significant contribution to modern tourism literature by exploring the sociolinguistic dimension related to tourists' accounts and particularly the transformation of self that occurs with the experience of travel. In particular, it addresses the interpersonal persuasion that travelers use in their stories to convince others to join in the ritual of backpacking by stressing the personal development that they have gained through their journeys.

This volume is groundbreaking in its dialogical conceptualization of the interview as a site of cultural manifestation, innovation, and power relations. The methods employed, which include qualitative sampling and interviewing, clearly demonstrate ways of negotiating, manifesting, and embodying speech performances. Because of its unique interdisciplinary nature, A Narrative Community will be of interest to sociolinguists, folklore scholars, performance studies scholars, tourism scholars, and those interested in social discourses in Israel.

Chaim Noy is an independent scholar currently teaching in the Department of Communication, the Hebrew University of Jerusalem.
or support indie stores by buying on
Copyright © 2020 American Booksellers Association