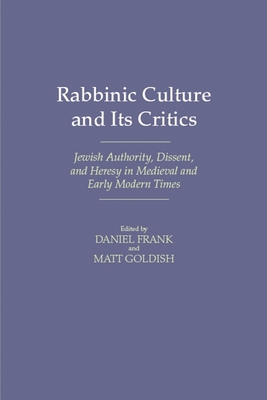 Rabbinic Culture and Its Critics (Hardcover)

The influential leaders, institutions, and texts that make up rabbinic culture have held a central place in Judaism since the Middle Ages and have given Jewish cultures across the world remarkably uniform systems of law and doctrines into the modern period. Even so, dissent from mainstream rabbinic culture always existed, prompted by matters such as textual interpretation, differences of authority, and definitions of spirituality. Rabbinic Culture and Its Critics exposes some of the views of these often-overlooked critics, sectarians, and so-called heretics as an important historical category in Jewish culture.

The book covers a wide span of time, from the days of the Babylonian Geonim, who first championed the Talmud in the early Middle Ages, to the period of the Maskilim, who promoted the Jewish Enlightenment in Europe during the eighteenth and nineteenth centuries. In their introductory essay, Daniel Frank and Matt Goldish define Rabbinic culture and survey the various types of critiques leveled against it. Subsequent essays consider different forms of dissent in detail, including the Andalusian tradition of belletristic satire, Moses Maimonides' critical views of contemporary Jewish beliefs and practices, Karaite-Rabbanite polemics, the ambivalence toward rabbinic teachings among the communities of the Western Sephardi Diaspora, and the messianic movement surrounding Shabbatai Zvi.

The essays in Rabbinic Culture and Its Critics offer a fresh, interdisciplinary perspective on Jewish dissent within a traditional society that cuts across temporal, geographical, and phenomenological boundaries. The volume will provide informative reading for scholars of Jewish studies and anyone with an interest in religious history.