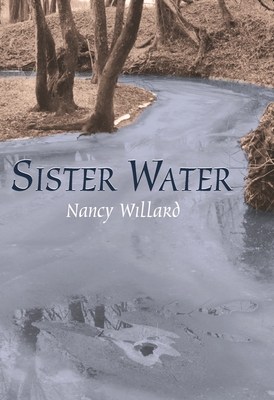 The widowed Jessie Woolman, now in her seventies, her two married daughters, Ellen and Martha, and two grandchildren live in Ann Arbor, where the family owns a museum that harbors a meandering stream and historical artifacts of the region bounded by the rivers. Just as Jessie's aging mind begins to wander, Ellen's husband dies in a car accident and the Woolman family begins a new journey led by two very different men: Harvey Mack, a developer with an eye on the Woolman property and the grieving Ellen, and Sam Theopolis, a mystic hired to care for Jessie. Sam becomes both Harvey's rival and a healing presence for the family until a crisis descends and he, too, needs the protection of the Woolmans' innocent belief in the saving power of love.

Combining sorrow and grief with considerable light-hearted wit and eccentric characters, Sister Water is a novel that will reach old and young readers alike. Through her lyrical prose, author Nancy Willard draws on the rich style of magical realism to create a narrative flow that is at once powerful and seductive. Important to the Landscapes of Childhood series, this novel raises significant questions about the state of childhood and how that state affects adult sensibilities.

Nancy Willard is a lecturer in English at Vassar College. She is the author of two novels, Things Invisible to See (Knopf, 1994) and Sister Water, and eleven books of poetry-the most recent of which is Swimming Lessons (Knopf, 1996). In addition to being a poet, essayist, and novelist, she is a noted writer of children's books, including A Visit to William Blake's Inn (Harcourt Children's Books, 1981), which was nominated for the National Book Award and was the first poetry book to win the Newbery Medal.
or
Buy Here
Copyright © 2020 American Booksellers Association