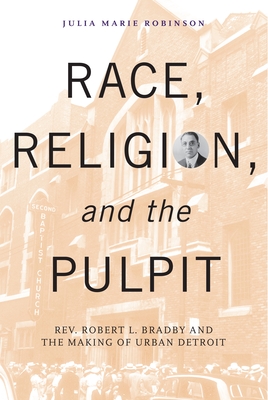 Race, Religion, and the Pulpit (Hardcover)

During the Great Migration of African Americans from the South to the cities of the Northeast, Midwest, and West, the local black church was essential in the making and reshaping of urban areas. In Detroit, there was one church and one minister in particular that demonstrated this power of the pulpit--Second Baptist Church of Detroit ("Second," as many members called it) and its nineteenth pastor, the Reverend Robert L. Bradby. In Race, Religion, and the Pulpit: Rev. Robert L. Bradby and the Making of Urban Detroit, author Julia Marie Robinson explores how Bradby's church became the catalyst for economic empowerment, community building, and the formation of an urban African American working class in Detroit.

Robinson begins by examining Reverend Bradby's formative years in Ontario, Canada; his rise to prominence as a pastor and community leader at Second Baptist in Detroit; and the sociohistorical context of his work in the early years of the Great Migration. She goes on to investigate the sometimes surprising nature of relationships between Second Baptist, its members, and prominent white elites in Detroit, including Bradby's close relationship to Ford Motor Company and Henry Ford. Finally, Robinson details Bradby's efforts as a "race leader" and activist, roles that were tied directly to his theology. She looks at the parts the minister played in such high-profile events as the organizing of Detroit's NAACP chapter, the Ossian Sweet trial of the mid-1920s, the Scottsboro Boys trials in the 1930s, and the controversial rise of the United Auto Workers in Detroit in the 1940s.

Race, Religion, and the Pulpit presents a full and nuanced picture of Bradby's life that has so far been missing from the scholarly record. Readers interested in the intersections of race and religion in American history, as well as anyone with ties to Detroit's Second Baptist Church, will appreciate this thorough volume.

Julia Marie Robinson is an associate professor of African American religion at the University of North Carolina at Charlotte and an ordained minister in the Presbyterian Church (USA).
or support indie stores by buying on
Copyright © 2020 American Booksellers Association