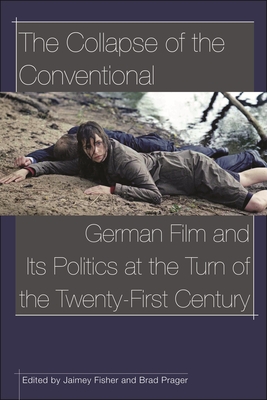 The Collapse of the Conventional (Paperback)

While difficult questions of history, culture, and politics figured less prominently in the lighter cinematic fare of the 1980s and 1990s, German filmmakers have recaptured the world's attention since the turn of the millennium with vital, dynamic, and engaged works. In fact, today's filmmakers have turned back to many themes that were important in the 1960s and 1970s, when a movement of young filmmakers proclaimed the collapse of existing filmmaking conventions. In The Collapse of the Conventional: German Film and Its Politics at the Turn of the Twenty-First Century, editors Jaimey Fisher and Brad Prager present contributions from prominent German film studies scholars to examine the current politically charged and provocative moment in German filmmaking historically, ideologically, and formally as another break with cinematic convention.

Fisher and Prager introduce the volume with a look back at the history of German film to define New German Cinema and identify the themes and motives that characterize its films and filmmakers. In the first section, essays explore the cinematic treatment of German national identity in historical films, including those that confront Germany's Nazi past, such as Downfall, The Miracle of Bern, and the TV-film Dresden. The second section takes on German cinema's examination of life in East Germany and the consequences of reunification by analyzing the films Good Bye, Lenin and The Lives of Others. The Collapse of the Conventional also examines new groundbreaking work by filmmakers such as Christian Petzold, Fatih Ak?n, and Christoph Hochh?usler to investigate how German film critically approaches globalization and the end of the cold war. This collection shows that today's German filmmakers are delving into new modes of cinematic production in a global context. Students, scholars of film, and anyone interested in German and cultural studies will appreciate this volume.

Jaimey Fisher is associate professor of German at the University of California-Davis. He is the author of Disciplining Germany: Youth, Reeducation, and Reconstruction after the Second World War (Wayne State University Press, 2007). He is also co-editor (with Peter Uwe Hohendahl) of Critical Theory: Current State and Future Prospects and (with Barbara Mennel) of Spatial Turns: Space, Place, and Mobility in German Literary and Visual Culture.Brad Prager is associate professor of German and film studies at the University of Missouri. He is the author of Aesthetic Vision and German Romanticism: Writing Images and The Cinema of Werner Herzog: Aesthetic Ecstasy and Truth. He is also co-editor (with David Bathrick and Michael D. Richardson) of Visualizing the Holocaust: Documents, Aesthetics, Memory.
or support indie stores by buying on
Copyright © 2020 American Booksellers Association