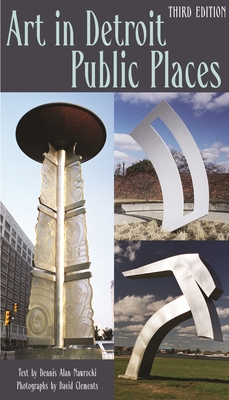 The Detroit area is home to numerous significant works of public art in its parks, libraries, schools, and hospitals. This new and updated edition of a classic guidebook considers over 150 pieces organized by section into six geographical districts of metropolitan Detroit. Each of these sections is accompanied by a comprehensive street map for easy planning of walking or driving tours, and the artworks in it are presented with individual descriptive histories and photographs. With our artistic and architectural heritage always under threat from new development and sprawl, Art in Detroit Public Places showcases the rich tradition of public art already in our community and also raises awareness of the need for its preservation.

The vast collection of public art in metropolitan Detroit includes works by such important national and international figures as Alexander Calder, Gutzon Borglum, Sam Gilliam, Robert Graham, Carl Milles, Louise Nevelson, Isamu Noguchi, and Auguste Rodin, as well as fine pieces by many noteworthy area artists. City founders, corporations, commercial developers, and private citizens have all contributed to this rich legacy, and many of the newly built public spaces in the area have been enlivened with artwork in recent years. This new and updated version of Art in Detroit Public Places adds more than thirty works to those considered in the previous edition, including Babcock and Ernstberger's Monroe and Woodward Monument Markers in the city's Campus Martius Park and Barr and De Giusti's Transcending in Hart Plaza.

As downtown Detroit and the surrounding areas continue to evolve and grow, Art in Detroit Public Places serves as a record of public art already in existence and a fitting justification for its protection. Art and architecture enthusiasts, along with anyone interested in the cityscape of Detroit, will enjoy this useful volume.

Dennis Alan Nawrocki is an adjunct professor of art history at the College for Creative Studies and Wayne State University in Detroit, Michigan.David Clements is a professional producer and director of radio, television, and photography. His work also appears in Talking Shops (Wayne State University Press, 2005).
or support indie stores by buying on
Copyright © 2020 American Booksellers Association