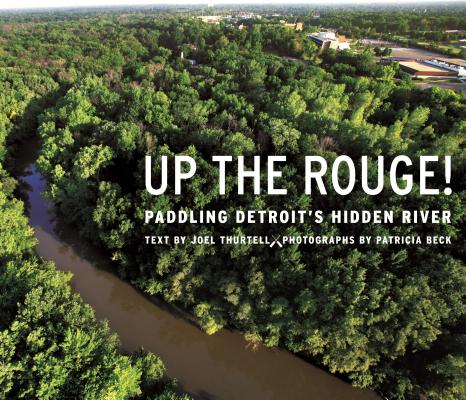 There is no river quite like Detroit's Rouge River. Named by French explorers, the Rouge's moniker was borrowed by Henry Ford for his huge automobile factory near the river's mouth. The river is also home to two steel mills; cement, gypsum, and salt operations; and the largest single-unit wastewater treatment plant in the country. Although the Rouge is too polluted for public recreation and, in places, too log-jammed for a motorboat, Detroit Free Press reporter Joel Thurtell and photographer Patricia Beck decided to travel up the Rouge by canoe to explore not only the river's industrial side but also its beautiful and hidden urban wilderness. Up the Rouge is the surprising and educational account of their journey, narrated by Thurtell and heavily illustrated with Beck's evocative and eclectic photographs.

Thurtell and Beck logged more than sixty hours during the first week of June 2005 as they paddled their canoe up more than 27 miles of the Rouge from Zug Island at the Detroit River to Nine Mile and Beech roads in Southfield. Though the Rouge is heavily polluted by sewage, and large sections of the 127-mile-long river have been purposely made inaccessible to the public, government agencies have spent $1.6 billion dollars trying to clean it up. Thurtell and Beck show that despite its environmental contamination, the Rouge is home to wildlife and that its very seclusion makes it a sanctuary. During their trek, the authors saw animals such as green and blue herons, snapping turtles, musk turtles, mallards, feral dogs, and the first adult female common mergansers ever recorded in summertime in Wayne County. Maps are included to help readers track their journey.

Up the Rouge is a story about discovery, a tale of adventure, and an informative study of the environment. The series of articles in the Detroit Free Press on which this volume is based won the Water Environment Federation's 2006 Harry E. Schlenz Medal for Public Education. Anyone interested in environmental issues or conservation of Michigan's waterways will appreciate this unique and attractive volume.

Joel Thurtell was a news reporter for thirty years, retiring in 2007 from the Detroit Free Press. Among his awards is the Michigan Education Association's School Bell Award for his expos? of corrupt financing schemes for Michigan schools.Patricia Beck has been a Detroit Free Press staff photographer since 1977. She has been honored with numerous awards, including the Robert F. Kennedy Award for Outstanding Coverage of the Problems of the Disadvantaged.
Loading...
or
Not Currently Available for Direct Purchase