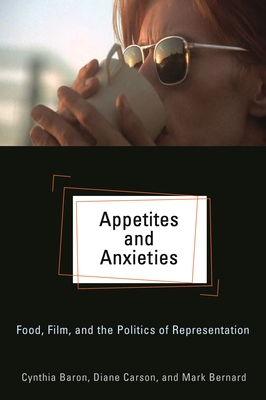 Food, Film, and the Politics of Representation (Contemporary Approaches to Film and Television)

Cinema is a mosaic of memorable food scenes. Detectives drink alone. Gangsters talk with their mouths full. Families around the world argue at dinner. Food documentaries challenge popular consumption-centered visions. In Appetites and Anxieties: Food, Film, and the Politics of Representation, authors Cynthia Baron, Diane Carson, and Mark Bernard use a foodways paradigm, drawn from the fields of folklore and cultural anthropology, to illuminate film's cultural and material politics. In looking at how films do and do not represent food procurement, preparation, presentation, consumption, clean-up, and disposal, the authors bring the pleasures, dangers, and implications of consumption to center stage.

In nine chapters, Baron, Carson, and Bernard consider food in fiction films and documentaries-from both American and international cinema. The first chapter examines film practice from the foodways perspective, supplying a foundation for the collection of case studies that follow. Chapter 2 takes a political economy approach as it examines the food industry and the film industry's policies that determine representations of food in film. In chapter 3, the authors explore food and food interactions as a means for creating community in Bagdad Caf?, while in chapter 4 they take a close look at 301/302, in which food is used to mount social critique. Chapter 5 focuses on cannibal films, showing how the foodways paradigm unlocks the implications of films that dramatize one of society's greatest food taboos. In chapter 6, the authors demonstrate ways that insights generated by the foodways lens can enrich genre and auteur studies. Chapter 7 considers documentaries about food and water resources, while chapter 8 examines food documentaries that slip through the cracks of film censorship by going into exhibition without an MPAA rating. Finally, in chapter 9, the authors study films from several national cinemas to explore the intersection of food, gender, and ethnicity.

Four appendices provide insights from a food stylist, a selected filmography of fiction films and a filmography of documentaries that feature foodways components, and a list of selected works in food and cultural studies. Scholars of film studies and food studies will enjoy the thought-provoking analysis of Appetites and Anxieties.

Cynthia Baron is the author of Denzel Washington. She is also co-author of Reframing Screen Performance and co-editor of More Than a Method: Trends and Traditions in Contemporary Film Performance (Wayne State University Press, 2004). Mark Bernard is the author of Selling the Splat Pack: The DVD Revolution and the American Horror Film and co-author of a forthcoming book on horror film performance and cult reception. Diane Carson is the editor of John Sayles: Interviews and co-editor of Sayles Talk: New Perspectives on Independent Filmmaker John Sayles (Wayne State University Press, 2006). She is also co-editor of More Than a Method (Wayne State University Press, 2004), Shared Differences: Multicultural Media and Practical Pedagogy, and Multiple Voices in Feminist Film Criticism.
or support indie stores by buying on
Copyright © 2020 American Booksellers Association