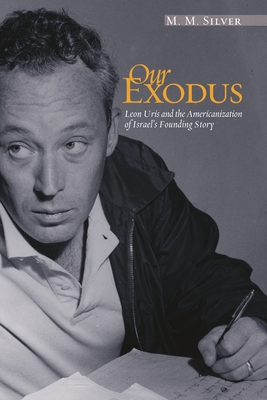 Leon Uris and the Americanization of Israel's Founding Story

Despite the dramatic circumstances of its founding, Israel did not inspire sustained, impassioned public discussion among Jews and non-Jews in the United States until Leon Uris's popular novel Exodus was released in 1958. Uris's novel popularized the complicated story of Israel's founding and, in the process, boosted the morale of post-Holocaust Jewry and disseminated in popular culture positive images of Jewish heroism. Our Exodus: Leon Uris and the Americanization of Israel's Founding Story examines the phenomenon of Exodus and its largely unrecognized influence on post-World War II understandings of Israel's beginnings in America and around the world.

Author M. M. Silver's extensive archival research helps clarify the relevance of Uris's own biography in the creation of Exodus. He situates the novel's enormous popularity in the context of postwar America, and particularly Jewish American culture of the 1950s and early 1960s. In telling the story of the making of and the response to Exodus, first as a book and then as a film, Silver shows how the representation of historical events in Exodus reflected needs, expectations, and aspirations of Jewish identity and culture in the post-Holocaust world. He argues that while Uris's novel simplified some facts and distorted others, it provided an astonishingly ample amount of information about Jewish history and popularized a persuasive and cogent (though debatable) Zionist interpretation of modern Jewish history.

Silver also argues that Exodus is at the core of an evolving argument about the essential compatibility between the Jewish state and American democracy that continues to this day. Readers interested in Israel studies, Jewish history, and American popular culture will appreciate Silver's unique analysis.

M. M. Silver heads the general studies department at the Max Stern College of Emek Yezreel. His English and Hebrew publications on topics in Modern Jewish History include First Contact: Origins of the American-Israeli Connection. He has worked as a visiting scholar in several U.S. universities and lives with his family in the Galilee.
Loading...
or support indie stores by buying on