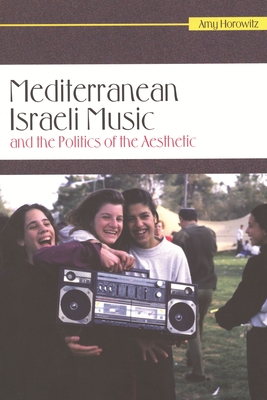 The relocation of North African and Middle Eastern Jews to Israel in the 1950s and 1960s brought together communities from Egypt, Iraq, Kurdistan, Yemen, and many other Islamic countries, as well as their unique music styles. In the unstable, improvisatory spaces of transit camps, development towns, and poor neighborhoods, they created a new pan-ethnic Mizrahi identity and a homegrown hybrid music that inspired equal parts high-pitched enthusiasm and resistance along the fault lines of Israel's ethnic divide. In Mediterranean Israeli Music and the Politics of the Aesthetic, author Amy Horowitz investigates the emergence of a new pan-ethnic Mizrahi style of music between the 1970s and 1990s, as the community struggled to gain recognition on the overlapping stages of politics and music.

This volume is both an ethnographic study based on Horowitz's immersion in the Mizrahi community and a multi-voiced account of community members, who describe their music and musicians who play it. Horowitz focuses primarily on the work of three artists-Avihu Medina, Zohar Argov, and Zehava Ben-who pioneered a recognizable Mizrahi style and moved this new musical formation from the Mizrahi neighborhoods to the national arena. She also contextualizes the music within the history of the community by detailing the mass migration of North African and Middle Eastern Jews to Israel, the emergence of these immigrants as a pan-ethnic political coalition in the 1970s, and the opening up of markets for disenfranchised music makers as a result of new recording technologies, including the cassette recorder and four-way duplicating machine.

Mediterranean Israeli Music and the Politics of the Aesthetic places folklore within the frameworks of nationalism, ethnicity, ethnomusicology, Jewish studies, Israel studies, Middle Eastern Studies, and politics. Anyone interested in these disciplines will appreciate this remarkable volume.

Amy Horowitz is a scholar, activist, and cultural worker. She served as acting director of Smithsonian Folkways Recordings, where she was awarded a Grammy as co-producer of The Anthology of American Folk Music. She teaches courses on music, globalization, and Jerusalem through the International Studies Program and is a research associate at the Middle East Studies Center and the Mershon Center for International Security Studies at The Ohio State University, where she produced Protest Music as Responsible Citizenship: A Conversation with Pete Seeger, Harry Belafonte, Holly Near, and Bernice Johnson Reagon.
or support indie stores by buying on
Copyright © 2020 American Booksellers Association