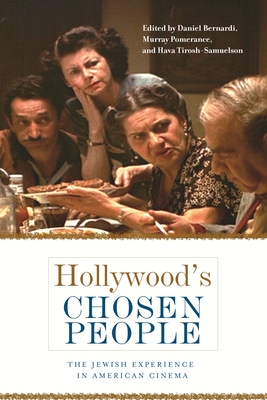 As studio bosses, directors, and actors, Jews have been heavily involved in film history and vitally involved in all aspects of film production. Yet Jewish characters have been represented onscreen in stereotypical and disturbing ways, while Jews have also helped to produce some of the most troubling stereotypes of people of color in Hollywood film history. In Hollywood's Chosen People: The Jewish Experience in American Cinema, leading scholars consider the complex relationship between Jews and the film industry, as Jews have helped to construct Hollywood's vision of the American dream and American collective identity and have in turn been shaped by those representations.

Editors Daniel Bernardi, Murray Pomerance, and Hava Tirosh-Samuelson introduce the volume with an overview of the history of Jews in American popular culture and the American film industry. Multidisciplinary contributors go on to discuss topics such as early Jewish films and directors, institutionalized anti-Semitism, Jewish identity and gossip culture, and issues of Jewish performance on film. Contributors draw on a diverse sampling of films, from representations of the Holocaust on film to screen comedy; filmmakers and writers, including David Mamet, George Cukor, Sidney Lumet, Edward Sloman, and Steven Spielberg; and stars, like Barbra Streisand, Adam Sandler, and Ben Stiller.

The Jewish experience in American cinema reveals much about the degree to which Jews have been integrated into and contribute to the making of American popular film culture. Scholars of Jewish studies, film studies, American history, and American culture as well as anyone interested in film history will find this volume fascinating reading.

Daniel Bernardi is professor and chair at the Department of Cinema of San Francisco State University. He is the author of Star Trek and History: Race-ing toward a White Future and co-author of Narrative Landmines: Rumors, Islam Extremism, and the Struggle for Strategic Influence. Murray Pomerance is a Canadian film scholar, author, and professor who teaches in the Department of Sociology at Ryerson University and in the joint program in communication and culture at Ryerson University and York University. He has written extensively on film, cinematic experience, and performance. Most recently he authored Michelangelo Red Antonioni Blue: Eight Reflections on Cinema and Edith Valmaine. Pomerance is the editor and co-editor of a dozen books and the editor of several book series on film at Rutgers University Press and at the State University of New York Press. Hava Tirosh-Samuelson is professor of history, director of Jewish studies, and Irving and Miriam Lowe Chair of Modern Judaism at Arizona State University. She specializes in Jewish intellectual history, Judaism and science, and Judaism and ecology. In addition to numerous essays and book chapters, she is the author of the award-winning Between Worlds: The Life and Thought of Rabbi David ben Judah Messer Leon and Happiness in Premodern Judaism: Virtue, Knowledge and Well-Being and is the editor of five books. Contributors: Daniel Bernardi, Vincent Brook, Wheeler Winston Dixon, Lucy Fischer, Lester D. Friedman, Sumiko Higashi, Sarah Kozloff, Peter Kr?mer, Murray Pomerance, Catherine Portuges, William Rothman, Vivian Sobchack, David Sterritt, Hava Tirosh-Samuelson
or support indie stores by buying on
Copyright © 2020 American Booksellers Association