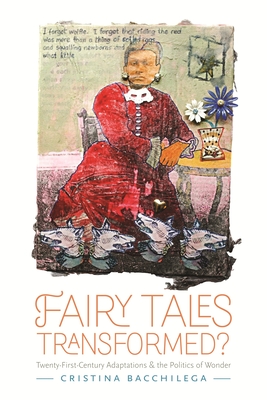 Fairy-tale adaptations are ubiquitous in modern popular culture, but readers and scholars alike may take for granted the many voices and traditions folded into today's tales. In Fairy Tales Transformed?: Twenty-First-Century Adaptations and the Politics of Wonder, accomplished fairy-tale scholar Cristina Bacchilega traces what she terms a "fairy-tale web" of multivocal influences in modern adaptations, asking how tales have been changed by and for the early twenty-first century. Dealing mainly with literary and cinematic adaptations for adults and young adults, Bacchilega investigates the linked and yet divergent social projects these fairy tales imagine, their participation and competition in multiple genre and media systems, and their relation to a politics of wonder that contests a naturalized hierarchy of Euro-American literary fairy tale over folktale and other wonder genres.

Bacchilega begins by assessing changes in contemporary understandings and adaptations of the Euro-American fairy tale since the 1970s, and introduces the fairy-tale web as a network of reading and writing practices with a long history shaped by forces of gender politics, capitalism, and colonialism. In the chapters that follow, Bacchilega considers a range of texts, from high profile films like Disney's Enchanted, Guillermo del Toro's Pan's Labyrinth, and Catherine Breillat's Bluebeard to literary adaptations like Nalo Hopkinson's Skin Folk, Emma Donoghue's Kissing the Witch, and Bill Willingham's popular comics series, Fables. She looks at the fairy-tale web from a number of approaches, including adaptation as "activist response" in Chapter 1, as remediation within convergence culture in Chapter 2, and a space of genre mixing in Chapter 3. Chapter 4 connects adaptation with issues of translation and stereotyping to discuss mainstream North American adaptations of The Arabian Nights as "media text" in post-9/11 globalized culture.

Bacchilega's epilogue invites scholars to intensify their attention to multimedia fairy-tale traditions and the relationship of folk and fairy tales with other cultures' wonder genres. Scholars of fairy-tale studies will enjoy Bacchilega's significant new study of contemporary adaptations.

Cristina Bacchilega is professor of English at the University of Hawai'i at Manoa, where she teaches fairy tales and their adaptations, folklore and literature, and cultural studies. She is also the author of Postmodern Fairy Tales: Gender and Narrative Strategies and of Legendary Hawai'i and the Politics of Place: Tradition, Translation, and Tourism, and the co-editor with Danielle Roemer of Angela Carter and the Fairy Tale (Wayne State University Press, 2001) and with Donatella Izzo and Bryan Kamaoli Kuwada of Anglistica's special issue on "Sustaining Hawaiian Sovereignty."
or support indie stores by buying on
Copyright © 2020 American Booksellers Association