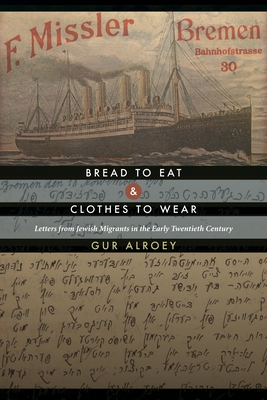 Bread to Eat and Clothes to Wear (Paperback)

Letters from Jewish Migrants in the Early Twentieth Century

Between 1875 and 1924, more than 2.7 million Jews from Eastern Europe left their home countries in the hopes of escaping economic subjugation and religious persecution and creating better lives overseas. Although many studies have addressed how these millions of men, women, and children were absorbed into their destination countries, very little has been written on the process of deciding to migrate. In Bread to Eat and Clothes to Wear: Letters from Jewish Migrants in the Early Twentieth Century, author Gur Alroey fills this gap by considering letters written by Eastern European Jews embarking on their migration.

Alroey begins with a comprehensive introduction that describes the extent and unique characteristics of Jewish migration during this period, discusses the establishment of immigrant information bureaus, and analyzes some of the specific aspects of migration that are reflected in the letters. In the second part of the book, Alroey translates and annotates 66 letters from Eastern European Jews considering migration. From the letters, readers learn firsthand of the migrants' fear of making a decision; their desire for advice and information before they took the fateful step; the gnawing anxiety of women whose husbands had already sailed for America and who were waiting impatiently for a ticket to join them; women whose husbands had disappeared in America and had broken off contact with their families; pogroms (documented in real time); and the obstacles and hardships on the way to the port of exit, as described by people who had already set out.

Through the letters in Bread to Eat and Clothes to Wear readers will follow the dilemmas and predicaments of the ordinary Jewish migrant, the difficulties of migration, and the changes that it brought about within the Jewish family. Scholars of Jewish studies and those interested in American and European history will appreciate this landmark volume.

Gur Alroey is professor of Jewish history in modern times at the University of Haifa. He is also author of The Immigrants: The Jewish Immigration to Palestine in the Early Twentieth Century, The Quiet Revolution: The Jewish Emigration from the Russian Empire in the Early Twentieth Century, and "Homeland Seekers": The Jewish Territorialism Organization (JTO) and the Zionist movement, 1905-1925.
or support indie stores by buying on
Copyright © 2020 American Booksellers Association