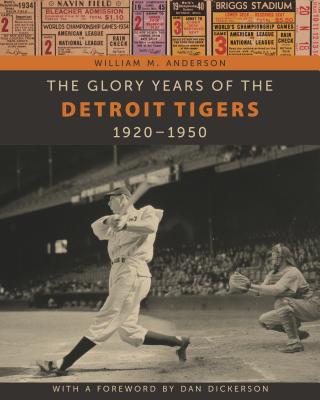 The Glory Years of the Detroit Tigers (Hardcover)

By Dan Dickerson (Foreword by)

In the three decades between 1920 and 1950, the Detroit Tigers won four American League pennants, the first world championship in team history in 1935, and a second world crown ten years later. Star players of this era-including Ty Cobb, Harry Heilmann, Charlie Gehringer, Hank Greenberg, Mickey Cochrane, George Kell, and Hal Newhouser-represent the majority of Tigers players inducted into the Hall of Fame. Sports writers followed the team feverishly, and fans packed Navin Field (later Briggs Stadium) to cheer on the high-flying Tigers, with the first record season attendance of one million recorded in 1924 and surpassed eight more times before 1950. In The Glory Years of the Detroit Tigers: 1920-1950, author William M. Anderson combines historical narrative and photographs of these years to argue that these years were the greatest in the history of the franchise.

Anderson presents over 350 unique and lively images, mostly culled from the remarkable Detroit News archive, that showcase players' personalities as well as their exploits on the field. For their meticulous coverage and colorful style, Anderson consults Tigers reporting from the three daily Detroit newspapers of the era (the Detroit News, Detroit Free Press, and Detroit Times) and the Sporting News, which was known then as the "Baseball Bible." Some especially compelling columns are reproduced intact to give readers a feel for the exciting and careful reporting of these years. Anderson combines historical text with photos in six topical chapters: "Spring Training: When Dreams are Entertained," "Franchise Stars," "The Supporting Cast," "Moments of Glory and Notable Games," "The War Years," and "The Old Ballpark: Where Legends and Memories Were Made." Anderson presents sketches of many fine players who have been overlooked in other histories and visits characters who often acted in strange ways: Dizzy Trout, Gee Walker, Elwood "Boots" "The Baron" Poffenbeger, and Louis "Bobo" "Buck" Newsom.

Tigers fans and anyone interested in local sports culture will enjoy this comprehensive and compelling look into the glory years of Tigers history.

William M. Anderson is the retired founding director of the Michigan Department of History, Arts, and Libraries and also had a thirty-three-year career in higher education, during which time he served as president of Carl Sandburg College in Galesburg, Illinois, and West Shore Community College near Scottville, Michigan. Dr. Anderson is a widely published baseball and Civil War historian, a past president of the Historical Society of Michigan, and a past member of the Michigan Humanities Council. He is the author or editor of ten books, including The Detroit Tigers: A Pictorial Celebration of the Greatest Players and Moments in Tigers History (Wayne State University Press, 2008).
or
Not Currently Available for Direct Purchase
Copyright © 2020 American Booksellers Association