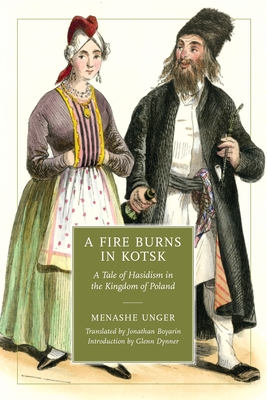 A Fire Burns in Kotsk (Paperback)

A Tale of Hasidism in the Kingdom of Poland

Half a century after Hasidism blossomed in Eastern Europe, its members were making deep inroads into the institutional structure of Polish Jewish communities, but some devotees believed that the movement had drifted away from its revolutionary ideals. Menashe Unger's A Fire Burns in Kotsk dramatizes this moment of division among Polish Hasidim in a historical account that reads like a novel, though the book was never billed as such. Originally published in Buenos Aires in 1949 and translated for the first time from Yiddish by Jonathan Boyarin, this volume captures an important period in the evolution of the Hasidic movement, and is itself a missing link to Hasidic oral traditions.

A non-observant journalist who had grown up as the son of a prominent Hasidic rabbi, Unger incorporates stories that were told by his family into his historical account. A Fire Burns in Kotsk begins with a threat to the new, rebellious movement within Hasidism known as "the school of Pshiskhe," led by the good-humored Reb Simkhe Bunim. When Bunim is succeeded by the fiery and forbidding Rebbe of Kotsk, Menachem Mendl Morgenstern, the new leader's disdain for the vast majority of his followers will lead to a crisis in his court. Around this core narrative of reform and crisis in Hasidic leadership, Unger offers a rich account of the everyday Hasidic court life-filled with plenty of alcohol, stolen geese, and wives pleading with their husbands to come back home.

Unger's volume reflects a period when Eastern European Jewish immigrants enjoyed reading about Hasidic culture in Yiddish articles and books, even as they themselves were rapidly assimilating into American culture. Historians of literature, Polish culture, and Jewish studies will welcome this lively translation.

Jonathan Boyarin is the Mann Professor of Modern Jewish Studies at Cornell University and the author of Jewish Families and Mornings at the Stanton Street Shul.
or support indie stores by buying on
Copyright © 2020 American Booksellers Association