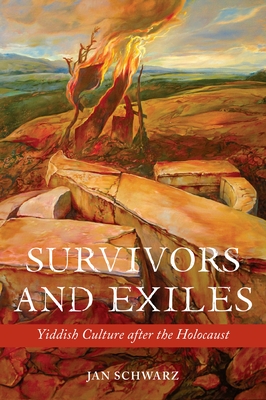 Yiddish Culture after the Holocaust

After the Holocaust's near complete destruction of European Yiddish cultural centers, the Yiddish language was largely viewed as a remnant of the past, tragically eradicated in its prime. In Survivors and Exiles: Yiddish Culture after the Holocaust, Jan Schwarz reveals that, on the contrary, Yiddish culture in the two and a half decades after the Holocaust was in dynamic flux. Yiddish writers and cultural organizations maintained a staggering level of activity in fostering publications and performances, collecting archival and historical materials, and launching young literary talents.

Schwarz traces the transition from the Old World to the New through the works of seven major Yiddish writers--including well-known figures (Isaac Bashevis Singer, Avrom Sutzkever, Yankev Glatshteyn, and Chaim Grade) and some who are less well known (Leib Rochman, Aaron Zeitlin, and Chava Rosenfarb). The first section, Ground Zero, presents writings forged by the crucible of ghettos and concentration camps in Vilna, Lodz, and Minsk-Mazowiecki. Subsequent sections, Transnational Ashkenaz and Yiddish Letters in New York, examine Yiddish culture behind the Iron Curtain, in Israel and the Americas. Two appendixes list Yiddish publications in the book series Dos poylishe yidntum (published in Buenos Aires, 1946-66) and offer transliterations of Yiddish quotes.

Survivors and Exiles charts a transnational post-Holocaust network in which the conflicting trends of fragmentation and globalization provided a context for Yiddish literature and artworks of great originality. Schwarz includes a wealth of examples and illustrations from the works under discussion, as well as photographs of creators, making this volume not only a critical commentary on Yiddish culture but also an anthology of sorts. Readers interested in Yiddish studies, Holocaust studies, and modern Jewish studies will find Survivors and Exiles a compelling contribution to these fields.

Jan Schwarz is associate professor of Yiddish studies at Lund University, Sweden. He began this position in 2011 after having taught Yiddish language and literature at University of Pennsylvania, University of Illinois Champaign-Urbana, Northwestern University, and University of Chicago. He is the author of Imagining Lives: Autobiographical Fiction of Yiddish Writers, as well as numerous critical articles about Jewish life-writing, Holocaust Literature, modern Yiddish culture, and Jewish American literature, and he is the translator of Scholem-Aleichem's Tevye the Dairyman into Danish.
or support indie stores by buying on
Copyright © 2020 American Booksellers Association