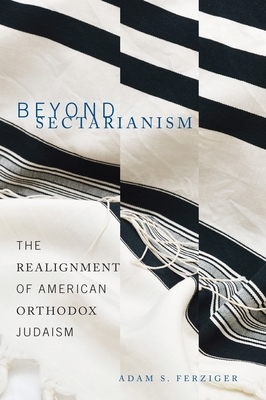 The Realignment of American Orthodox Judaism

In 1965 social scientist Charles S. Liebman published a study that boldly declared the vitality of American Jewish Orthodoxy and went on to guide scholarly investigations of the group for the next four decades. As American Orthodoxy continues to grow in geographical, institutional, and political strength, author Adam S. Ferziger argues in Beyond Sectarianism The Realignment of American Orthodox Judaism that one of Liebman's principal definitions needs to be updated. While Liebman proposed that the "committed Orthodox" -observant rather than nominally affiliated-could be divided into two main streams: "church," or Modern Orthodoxy, and "sectarian," or Haredi Orthodoxy, Ferziger traces a narrowing of the gap between them and ultimately a realignment of American Orthodox Judaism.

Ferziger shows that significant elements within Haredi Orthodoxy have abandoned certain strict and seemingly uncontested norms. He begins by offering fresh insight into the division between the American sectarian Orthodox and Modern Orthodox streams that developed in the early twentieth century and highlights New York's Congregation Kehilath Jeshurun as a pioneering Modern Orthodox synagogue. Ferziger also considers the nuances of American Orthodoxy as reflected in Soviet Jewish activism during the 1960s and early 1970s and educational trips to Poland taken by American Orthodox young adults studying in Israel, and explores the responses of prominent rabbinical authorities to Orthodox feminism and its call for expanded public religious roles for women. Considerable discussion is dedicated to the emergence of outreach to nonobservant Jews as a central priority for Haredi Orthodoxy and how this focus outside its core population reflects fundamental changes. In this context, Ferziger presents evidence for the growing influence of Chabad Hasidism - what he terms the "Chabadization of American Orthodoxy."

Recent studies, including the 2013 Pew Survey of U.S. Jewry, demonstrate that an active and strongly connected American Orthodox Jewish population is poised to grow in the coming decades. Jewish studies scholars and readers interested in history, sociology, and religion will appreciate Ferziger's reappraisal of this important group.

Adam S. Ferziger is a professor and holds the S.R. Hirsch Chair for Research of the Torah and Derekh Erez Movement in the Department of Jewish History and Contemporary Jewry at Bar-Ilan University, Ramat-Gan, Israel, and is co-convener of the Oxford Summer Institute for Modern and Contemporary Judaism, Oxford, UK. He is the author of Exclusion and Hierarchy: Orthodoxy, Nonobservance and the Emergence of Modern Jewish Identity and Jewish Denominations: Addressing the Challenges of Modernity.
Loading...
or support indie stores by buying on