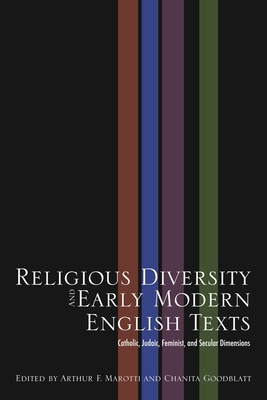 In Religious Diversity and Early Modern English Texts: Catholic, Judaic, Feminist, and Secular Dimensions, editors Arthur F. Marotti and Chanita Goodblatt present thirteen essays that examine the complex religious culture of early modern England. Emphasizing particularly the marginalized discourses of Catholicism and Judaism in mainstream English Protestant culture, the authors highlight the instability of an official religious order that was troubled not only by religious heterodoxy but also by feminist and secular challenges. North American and Israeli scholars present essays on a wide range of subjects all assumed to be "marginal" but which in a real sense were central to the religious and cultural life of the Protestant English nation.

Contributors show that we cannot understand a culture without attending to its repressed, marginalized, and unacknowledged elements. Scholars of religious, literary, and cultural history will enjoy this illuminating collection.

Arthur F. Marotti is distinguished professor emeritus of English at Wayne State University. He is the author of John Donne, Coterie Poet; Manuscript, Print, and the English Renaissance Lyric; and Religious Ideology and Cultural Fantasy: Catholic and Anti-Catholic Discourses in Early Modern England; he has edited or co-edited eight volumes of essays on early modern English literature and culture. Chanita Goodblatt is associate professor of English and comparative literature at Ben-Gurion University of the Negev. She is the author of The Christian Hebraism of John Donne: Written with the Fingers of Man's Hand. She has co-edited a volume of essays on early modern European literature and culture, as well as a volume on early modern women writers and the new textualism. She has also co-authored a series of essays on cognitive poetics, including a monograph essay on I. A. Richards.
or support indie stores by buying on
Copyright © 2020 American Booksellers Association