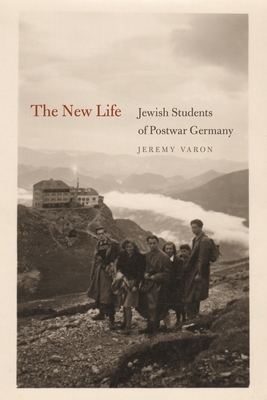 Jewish Displaced Persons (DPs) survived in concentration and death camps, in hiding, and as exiles in the Soviet interior. After liberation in the land of their persecutors, some also attended university to fulfill dreams of becoming doctors, engineers, and professionals. In The New Life: Jewish Students of Postwar Germany, Jeremy Varon tells the improbable story of the nearly eight hundred young Jews, mostly from Poland and orphaned by the Holocaust, who studied in universities in the American Zone of Occupied Germany. Drawing on interviews he conducted with the Jewish alumni in the United States and Israel and the records of their Student Union, Varon reconstructs how the students built a sense of purpose and a positive vision of the future even as the wounds of the past persisted.

Varon explores the keys to students' renewal, including education itself, the bond they enjoyed with one another as a substitute family, and their efforts both to reconnect with old passions and to revive a near-vanquished European Jewish intelligentsia. The New Life also explores the relationship between Jews and Germans in occupied Germany. Varon shows how mutual suspicion and resentment dominated interactions between the groups and explores the subtle ways anti-Semitism expressed itself just after the war. Moments of empathy also emerge, in which Germans began to reckon with the Nazi past. Finally, The New Life documents conflicts among Jews as they struggled to chart a collective future, while nationalists, both from Palestine and among DPs, insisted that Zionism needed "pioneers, not scholars," and tried to force the students to quit their studies.

Rigorously researched and passionately written, The New Life speaks to scholars, students, and general readers with interest in the Holocaust, Jewish and German history, the study of trauma, and the experiences of refugees displaced by war and genocide. With liberation nearly seventy years in the past, it is also among the very last studies based on living contact with Holocaust survivors.

Jeremy Varon is associate professor of history at the New School in New York City. He is also author of Bringing the War Home: The Weather Underground, The Red Army Faction, and Revolutionary Violence in the Sixties and Seventies and is a co-founder and editor of The Sixties: A Journal of History, Politics, and Culture. He lives in Brooklyn, New York, with his wife and son.
or support indie stores by buying on
Copyright © 2020 American Booksellers Association