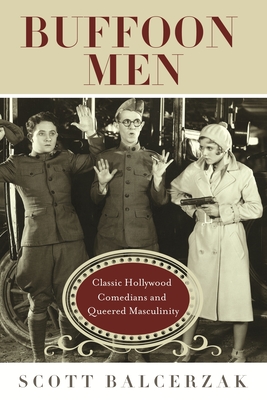 Film scholars and fans have used distinctive terms to describe the Classic Hollywood comedian: He is a "trickster," a "rebel," or a "buffoon." Yet the performer is almost always described as a "he." In Buffoon Men Classic Hollywood Comedians and Queered Masculinity, Scott Balcerzak reads the performances of notable comedians such as W. C. Fields, Eddie Cantor, Jack Benny, Stan Laurel and Oliver Hardy, Bert Wheeler and Robert Woolsey, and Bud Abbott and Lou Costello through humor and queer theory to expose a problematic history of maleness in their personas. He argues that contrary to popular notions of Classic Hollywood history, these male comedians rearranged or, at times, rejected heteronormative protocols.

Balcerzak begins by defining the particular buffoonish masculinity portrayed by early film comedians, a gender and genre construct influenced by the cultural anxieties of the 1930s and '40s. In chapter 1, he considers the onscreen pairing of W. C. Fields and Mae West to identify a queered sexuality and drag persona in Fields's performance, while in chapter 2 he examines the two major constructions of Fields's film persona-the confidence man and the husband-to show Fields to be a conflicted and subversive figure. In chapter 3, Balcerzak considers the assimilation and influence of Eddie Cantor as a Jewish celebrity, while he turns to the cross-media influence of Jack Benny's radio persona in chapter 4. In Chapters 5 and 6, he moves beyond the individual performer to examine the complex masculine brotherhood of comedy duos Laurel and Hardy, Abbott and Costello, and Bert Wheeler and Robert Woolsey.

Buffoon Men shows that the complicated history of the male comedian during the early sound era has much to tell us about multimedia comedic stars today. Fans and scholars of film history, gender studies, and broadcast studies will appreciate Balcerzak's thorough exploration of the era's fascinating gender constructs.

Scott Balcerzak is assistant professor of film and literature in the Department of English at Northern Illinois University. He is the co-editor of Cinephilia in the Age of Digital Reproduction: Film, Pleasure, and Digital Culture, Vols. 1 and 2.
or support indie stores by buying on
Copyright © 2020 American Booksellers Association