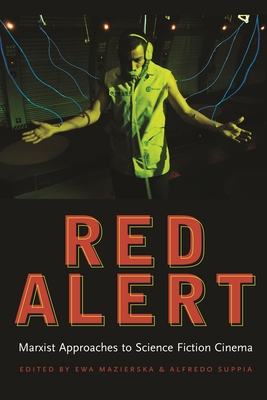 In Red Alert: Marxist Approaches to Science Fiction Cinema, editors Ewa Mazierska and Alfredo Suppia argue that Marxist philosophy, science fiction, and film share important connections concerning imaginings of the future. Contributors look at themes across a wide variety of films, including many international co-productions to explore individualism versus collectivism, technological obstacles to travel through time and space, the accumulation of capital and colonization, struggles of oppressed groups, the dangers of false ideologies, and the extension of the concept of labor due to technological advances.

This collection challenges the perception that science fiction cinema is a Western or specifically American genre, showing that a broader, transnational approach is necessary to fully understand its scope. Scholars and students of film, science fiction, and Marxist culture will enjoy Red Alert.

Ewa Mazierska is professor in film studies at the University of Central Lancashire and principal editor of a journal Studies in Eastern European Cinema. She has published over twenty monographs and edited collections, including From Self-Fulfillment to Survival of the Fittest: Work in European Cinema from the 1960s to the Present, Postcolonial Approaches to Eastern European Cinema: Representing Neighbours on Screen (with Eva N?ripea and Lars Kristensen), and Work in Cinema: Labor and Human Condition. Mazierska's work has been translated into almost twenty languages, including French, Italian, Chinese, Korean, Portugese, Estonian, and Serbian.Alfredo Suppia is professor of film studies at the State University of Campinas (UNICAMP), Brazil. He is also the author of Rarefied Atmosphere: Science Fiction in Brazilian Cinema and The Replicant Metropolis: Constructing a Dialogue Between Metropolis and Blade Runner.
or support indie stores by buying on
Copyright © 2020 American Booksellers Association