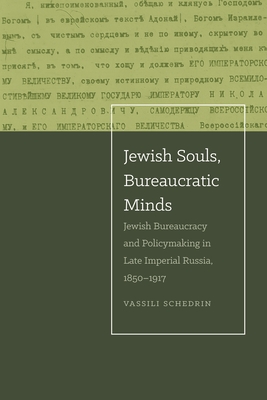 Jewish Souls, Bureaucratic Minds examines the phenomenon of Jewish bureaucracy in the Russian empire--its institutions, personnel, and policies--from 1850 to 1917. In particular, it focuses on the institution of expert Jews, mid-level Jewish bureaucrats who served the Russian state both in the Pale of Settlement and in the central offices of the Ministry of Internal Affairs in St. Petersburg. The main contribution of expert Jews was in the sphere of policymaking and implementation. Unlike the traditional intercession of shtadlanim (Jewish lobbyists) in the high courts of power, expert Jews employed highly routinized bureaucratic procedures, including daily communications with both provincial and central bureaucracies.

Vassili Schedrin illustrates how, at the local level, expert Jews advised the state, negotiated power, influenced decisionmaking, and shaped Russian state policy toward the Jews. Schedrin sheds light on the complex interactions between the Russian state, modern Jewish elites, and Jewish communities. Based on extensive new archival data from the former Soviet archives, this book opens a window into the secluded world of Russian bureaucracy where Jews shared policymaking and administrative tasks with their Russian colleagues. The new sources show these Russian Jewish bureaucrats to be full and competent participants in official Russian politics. This book builds upon the work of the original Russian Jewish historians and recent historiographical developments, and seeks to expose and analyze the broader motivations behind official Jewish policy, which were based on the political vision and policymaking contributions of Russian Jewish bureaucrats.

Scholars and advanced students of Russian and Jewish history will find Jewish Souls, Bureaucratic Minds to be an important tool in their research.

Dr. Vassili Schedrin is Alfred and Isabel Bader Postdoctoral Fellow at Queen's University in Kingston, Ontario. His current research projects include the history of nineteenth-century Jewish historiography in the Russian language and the biography of Solomon Mikhoels, beloved actor of Yiddish stage and unofficial leader of Soviet Jews.
or support indie stores by buying on
Copyright © 2020 American Booksellers Association