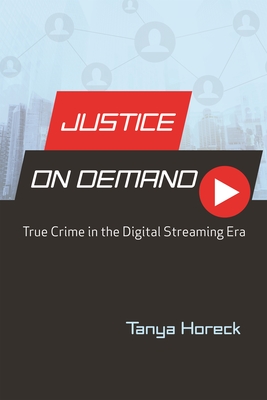 Justice on Demand: True Crime in the Digital Streaming Era offers a theoretical rumination on the question asked in countless blogs and opinion pieces of the last decade: Why are we so obsessed with true crime? Author Tanya Horeck takes this question further: Why is true crime thought to be such a good vehicle for the new modes of viewer/listener engagement favored by online streaming and consumption in the twenty-first century?

Examining a range of audiovisual true crime texts, from podcasts such as Serial and My Favorite Murder to long-form crime documentaries such as The Jinx and Making a Murderer, Horeck considers the extent to which the true crime genre has come to epitomize participatory media culture where the listener/viewer acts as a "desktop detective" or "internet sleuth." While Facebook and Twitter have re-invigorated the notion of the armchair detective, Horeck questions the rhetoric of interactivity surrounding true crime formats and points to the precarity of justice in the social media era. In a cultural moment in which user-generated videos of real-life violence surface with an alarming frequency, Justice on Demand addresses what is at stake in the cultural investment in true crime as packaged mainstream entertainment. Paying close attention to the gendered and racialized dimensions of true crime media, Horeck examines objects that are not commonly considered "true crime," including the subgenre of closed-circuit television (CCTV) elevator assault videos and the popularity of trailers for true crime documentaries on YouTube. By analyzing a range of intriguing case studies, Horeck explores how the audience is affectively imagined, addressed, and commodified by contemporary true crime in an "on demand" mediascape. As a fresh investigation of how contemporary variations of true crime raise significant ethical questions regarding what it means to watch, listen, and "witness" in a digital era of accessibility, immediacy, and instantaneity, Justice on Demand will be of interest to film, media, and digital studies scholars.

Tanya Horeck is a Reader in film, media, and culture at Anglia Ruskin University in Cambridge, England. She is author of the book Public Rape: Representing Violation in Fiction and Film and has published widely on violence and media spectatorship.
or
Buy Here
Copyright © 2020 American Booksellers Association