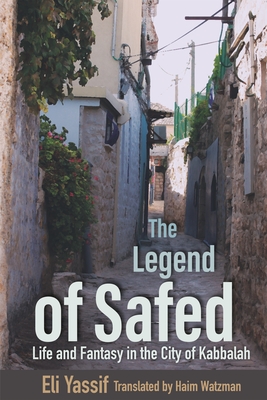 The Legend of Safed (Hardcover)

Life and Fantasy in the City of Kabbalah

In 1908, Solomon Schechter-discoverer of the Cairo Geniza and one of the founders of the Jewish Theological Seminary of America-published his groundbreaking essay on the city of Safed (Tzfat) during the sixteenth century. In the essay, Schechter pointed out the exceptional cultural achievements (religious law, moral teaching, hermeneutics, poetry, geography) of this small city in the upper Galilee but did not yet see the importance of including the foundation on which all of these fields began-the legends that were developed, told, and spread in Safed during this period. In The Legend of Safed: Life and Fantasy in the City of Kabbalah, author Eli Yassif utilizes "new historicism" methodology in order to use the non-canonical materials-legends and myths, visions, dreams, rumors, everyday dialogues-to present these legends in their historical and cultural context and use them to better understand the culture of Safed. This approach considers the literary text not as a reflection of reality, but a part of reality itself-taking sides in the debates and decisions of humans and serving as a major tool for understanding society and human mentality.

Divided into seven chapters, The Legend of Safed begins with an explanation of how the myth of Safed was founded on the general belief that during this "golden age" (1570-1620), Safed was an idyllic location in which complete peace and understanding existed between the diverse groups of people who migrated to the city. Yassif goes on to analyze thematic characteristics of the legends, including spatial elements, the function of dreams, mysticism, sexual sins, and omniscience. The book concludes with a discussion of the tension between fantasy (Safed is a sacred city built on morality, religious thought, and well-being for all) and reality (every person is full of weaknesses and flaws) and how that is the basis for understanding the vitality of Safed myth and its immense impact on the future of Jewish life and culture.

The Legend of Safed is intended for students, scholars, and general readers of medieval and early modern Jewish studies, Hebrew literature, and folklore.

Eli Yassif is professor emeritus of Hebrew literature and Jewish folklore at Tel-Aviv University. He is the author of many books and scholarly articles in the field of the Hebrew story in the Middle Ages and the history of Jewish folklore. His book The Hebrew Folktale: History, Genre, Meaning won the National Jewish Book Award in 2000 and became the standard textbook for the study of Jewish folk-narratives.
or support indie stores by buying on
Copyright © 2020 American Booksellers Association