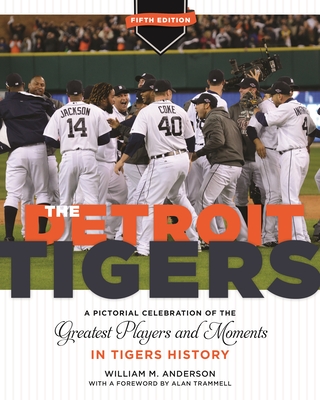 With over 500 carefully selected photographs, the fifth edition of The Detroit Tigers vividly illustrates the history of major league baseball in Detroit from 1881 through the 2014 season. Author William M. Anderson presents highlights and lowlights of each Tigers season and gives a context for appreciating the careers of the many players whose images grace the pages of the book.

In thirteen chapters, The Detroit Tigers covers the team's history decade by decade. Anderson surveys the Tigers' earliest days, formidable championship teams, and legendary players, and updates this edition with the team's exploits since the 2008 season. He details the recent star-studded Tigers cast, including Miguel Cabrera, Justin Verlander, Max Scherzer, Victor Martinez, and David Price, and looks at the team's four consecutive Central Division titles, 2012 pennant win, and seasons of record-breaking attendance, despite its disappointments in deeper post-season play. Anderson has searched to find the most interesting and rarely seen photos for this volume, visiting all major repositories of baseball photographs as well as private collections. Presented chronologically with ample description, the photos form the core of this impressive book. The Detroit Tigers also includes a foreword by former Tigers shortstop and later, manager, Alan Trammell. Tigers fans old and new will appreciate the exhaustive history and striking images in this volume.

William M. Anderson is the author or editor of ten books dealing with historical topics, including The Glory Years of the Detroit Tigers (Wayne State University Press, 2012). He is the former director of the Michigan Department of History, Arts and Libraries and the former president of two colleges.
or
Buy Here
(This book is on backorder)
Copyright © 2020 American Booksellers Association