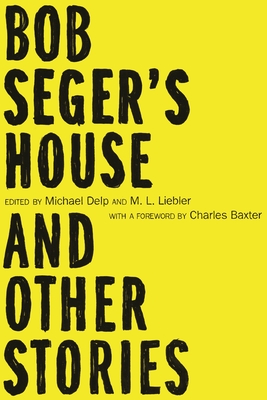 Bob Seger's House and Other Stories (Made in Michigan Writers) (Paperback)

Bob Seger's House and Other Stories is a collection of short stories written by some of Michigan's most well-known fiction writers. This collection of twenty-two short stories serves as a celebration not only of the tenth anniversary of the Made in Michigan Writers Series in 2016 but also of the rich history of writing and storytelling in the region. As series editors Michael Delp and M. L. Leibler state in their preface, "The stories contained in this anthology are a way to stay connected to each other. Think of them as messages sent from all over the map, stitching readers and writers together through stories that continue to honor the ancient art of the fire tale, the hunting epic, and all of the ways language feeds the blood of imagination."

The scope of this project reflects the dynamic and diverse writing that is currently taking place by people who consider their home to be the Great Lakes state. Stories are far-ranging, from the streets of Detroit and the iconic presence of the auto industry to the wild tracts of the Upper Peninsula. The book vibrates with that tension, of metal versus rock and human frailty taking on the pitfalls and hardships of living in this world.

In his foreword, Charles Baxter asks, "Does a region give rise to a particular kind of literature? Michigan is so fiercely diverse in its landscapes, its economy, and its demographics that it presents anybody who wants to write about it with a kind of blank slate. You can't summarize the state easily." These storytellers exude a "Michigan aesthetic" in their writing, something that cannot be learned in a textbook or taught in a classroom but can be felt through the tales of these storytellers.

The experience of picking up this collection is akin to taking a drive from the mechanized world and arriving several hours later in one of the wildest places on earth. Readers of short fiction will enjoy the multitude of voices in this anthology.

Michael Delp recently retired from the Interlochen Arts Academy, where he was the director of creative writing for many years. He is the author of numerous collections of prose and poetry, with his most recent collection of short stories being As If We Were Prey (Wayne State University Press, 2010). He is also the mentor and advisor to the Front Street Writers Program in Traverse City, which operates under the auspices of the National Writers Series. He lives in Interlochen with his wife, Claudia, and splits his time between there and Reeling Waters, his cabin on the Boardman River. M. L. Liebler is an award-winning poet, literary arts activist, and professor. He is the author of several books of poetry, including Wide Awake in Someone Else's Dream (Wayne State University Press, 2008), and an editor of the ground-breaking anthology Working Words: Punching the Clock and Kicking Out the Jams (Coffee House Press, 2010). He is also author of I Want to Be Once Wayne State University Press, 2016). He has taught at Wayne State University since 1980.
or support indie stores by buying on
Copyright © 2020 American Booksellers Association