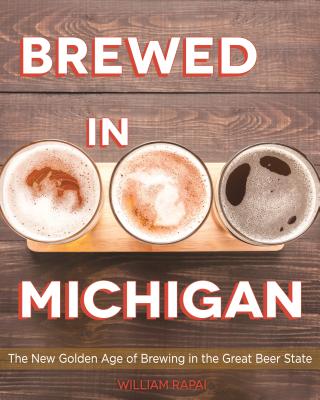 Brewed in Michigan: The New Golden Age of Brewing in the Great Beer State is William Rapai's "Ode on a Grecian Urn"-a discussion of art and art's audience. The art in this case is beer. Craft beer. Michigan craft beer, to be exact. Like the Great Lakes and the automobile, beer has become a part of Michigan's identity. In 2016, Michigan ranked fifth in the number of craft breweries in the nation and tenth in the nation in craft beer production. Craft brewing now contributes more than $1.8 billion annually to the state's economy and is proving to be an economic catalyst, helping to revive declining cities and invigorate neighborhoods.

This book is not a beer-tasting guide. Instead, Rapai aims to highlight the unique forces behind and exceptional attributes of the leading craft breweries in Michigan. Through a series of interviews with brewmasters over an eighteenth-month sojourn to microbreweries around the state, the author argues that Michigan craft beer is brewed by individuals with a passion for excellence who refuse to be process drones. It is brewed by people who have created a culture that values quality over quantity and measures tradition and innovation in equal parts. Similarly, the taprooms associated with these craft breweries have become a conduit for conversation-places for people to gather and discuss current events, raise money for charities, and search for ways to improve their communities. They're places where strangers become friends, friends fall in love, and lovers get married. These brewpubs and taprooms are an example in resourcefulness-renovating old churches and abandoned auto dealerships in Michigan's biggest cities, tiny suburbs, working-class neighborhoods, and farm towns. Beer, as it turns out, can be the lifeblood of a community.

Brewed in Michigan is a book for beer enthusiasts and for people who want a better understanding of what makes Michigan beer special. Cheers

William Rapai lives in Grosse Pointe, Michigan and is the author of two other books: Lake Invaders: Invasive Species and the Battle for the Future of the Great Lakes (Wayne State University Press, 2016) and The Kirtland's Warbler: The Story of a Bird's Fight Against Extinction and the People Who Saved it.
or
Buy Here
Copyright © 2020 American Booksellers Association