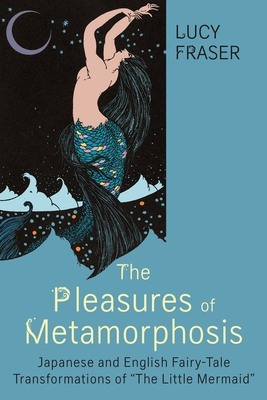 The Pleasures of Metamorphosis (Paperback)

The book begins with the various approaches to reading and writing fairy tales, with a history of "The Little Mermaid" in Japanese and English culture. Disney's The Little Mermaid and Studio Ghibli's Ponyo on the Cliff by the Sea are discussed as examples that simulate pleasurable physical experiences through animation's tools of music and voice, and visual effects of movement and metamorphosis. Fraser then explores the literary effects of the fairy tale by male authors, such as Oscar Wilde, Tanizaki Jun'ichiro, and Abe Kobo, who invoke familiar fairy-tale conventions and delineate some of the pleasures of what can be painful enchantment with a mermaid or with the fairy tale itself. The author examines the portrayals of the mermaid in three short stories by Matsumoto Yuko, Kurahashi Yumiko, and Ogawa Yoko, engaging with familiar fairy tales, reference to fairy-tale research, and reflections on the immersive experience of reading. Women characters and authors are also hyperaware of the possible meanings of Andersen's "The Little Mermaid" and of the fairy tale itself, furthering the discussion with Nonaka Hiiragi's novel Ningyo-hime no kutsu, and D di?]'s novel Sento no ningyo-hime to majo no mori, as well as an episode of the science fiction television series Dark Angel. Fraser concludes that the "pleasure" framework is useful for a cross-cultural study of creative engagements with and transformations of a particular fairy tale. Few studies have examined Japanese fairy-tale transformations to the extent that Fraser has, presenting fascinating information that will intrigue fairy-tale scholars and those wanting to learn more about the representation of pleasure behind the imaginative and fantastical.

Lucy Fraser is a lecturer in Japanese at the University of Queensland, Australia. Her research on Japanese and English retellings of fairy tales in literature and popular culture has appeared in Marvels and Tales: Journal of Fairy-Tale Studies, Japan Forum, and Global Manga Studies. She has also published translations of literature by leading writers such as Kawakami Hiromi and Hoshino Tomoyuki and of literary criticism by academics such as Honda Masuko and Kan Satoko.
or support indie stores by buying on
Copyright © 2020 American Booksellers Association