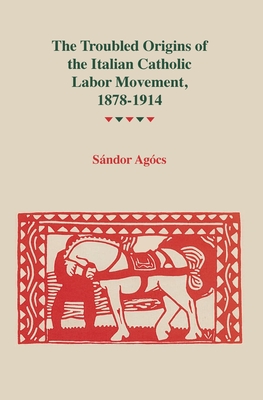 The Troubled Origins of the Italian Catholic Labor Movement, 1878-1914 (Paperback)

In his book, S?ndor Ag?cs explores the conflicts that accompanied the emergence of the Italian Catholic labor movement. He examines the ideologies that were at work and details the organizational forms they inspired.

During the formative years of the Italian labor movement, Neo-Thomism became the official ideology of the church. Church leadership drew upon the central Thomistic principal of caritas, Christian love, in its response to the social climate in Italy, which had become increasingly charged with class consciousness and conflict. Aquinas's principles ruled out class struggle as contrary to the spirit of Christianity and called for a symbiotic relationship among the various social strata. Neo-Thomistic philosophy also emphasized the social functions of property, a principle that demanded the paternalistic care and tutelage of the interests of working people by the wealthy.

Catholic activists, who were called upon to put ideas into practice and confronted social realities daily, learned that the "mixed" unions were a utopian vision that could not be realized. They knew that the age of paternalism was over and that neither the workers not the capitalists were interested in the mixed union. In its stead, the activists urged for the "simple" union, an organization for workers only. The conflict which ensued pitted the bourgeoisie and the Catholic hierarchy against the young activists.

S?ndor Ag?cs reveals precisely in what way Catholic social thought was inadequate to deal with the realities of unionization and why Catholics were unable to present a reasonable alternative.

S?ndor Ag?cs, a Ph.D. from the University of Rochester, is an assistant professor in the College of Lifelong Learning at Wayne State University. His articles on the Catholic labor movement have appeared in several scholarly journals. With this book, he presents an intellectual and social history of the then-nascent Italian labor movement, exploring the conservative Catholic hierarchy and Catholic activists. More fully than anyone else, he reveals in what way Catholic social thought was in adequate to deal with the new realities of unionization and why Catholics were unable to present a reasonable alternative.
or support indie stores by buying on
Copyright © 2020 American Booksellers Association