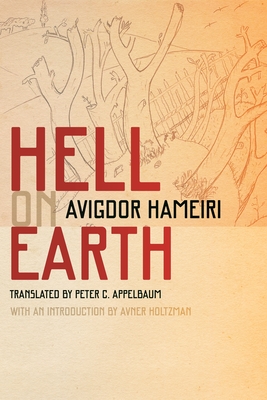 Hell on Earth is the second book written by Avigdor Hameiri (born Feuerstein; 1890-1970) about his experiences as a Russian prisoner of war during the second half of World War I. Translator Peter C. Appelbaum first became interested in Hameiri's story after learning that one quarter of the Austro-Hungarian army was captured and imprisoned, and that the horrific events that took place at this time throughout Russia and central Asia are rarely discussed in scholarly texts. Available for the first time to an English-speaking audience, this reality-driven novel is comparable to classics like All Quiet on the Western Front and The Gulag Archipelago.

The text is deeply tragic, while allowing some humor to shine through in the darkest hour. The reader is introduced to a procession of complex characters with whom Hamieri comes into contact during his imprisonment. The narrator watches his friends die one by one until he is released in 1917 with the help of Russian Zionist colleagues. He then immigrates to Israel in 1921. Hameiri's perspective on the things surrounding him-the Austro-Hungarian Army, the Russian people and countryside, the geography of Siberia, the nascent Zionist movement, the Russian Revolution and its immediate aftermath-offers a distinct personal view of a moment in time that is often overshadowed by the horrors of the Holocaust. In his preface, Appelbaum argues that World War I was the original sin of the twentieth century-without it, the unthinkable acts of World War II would not have come to fruition. With an introduction by Avner Holtzman, Hell on Earth is a fascinating, albeit gruesome, account of life in prison camps at the end of the First World War. Fans of historical fiction and war memoirs will appreciate the historic value in this piece of literature.

Peter C. Appelbaum is professor emeritus of pathology at Pennsylvania State University College of Medicine. After more than four decades in infectious disease research, Appelbaum is spending his retirement years writing and translating books on modern-day Jewish military history. He is the author of Loyalty Betrayed and Loyal Sons and, together with James Scott, has translated a bilingual anthology of war essays and poems by Kurt Tucholsky. Broken Carousel, his bilingual anthology of German-Jewish soldier poems is forthcoming. Avner Holtzman is a professor of Hebrew literature in Tel-Aviv University and a member of the Israel National Academy of Sciences. He specializes in Hebrew literature written between the nineteenth century and the present day. His research encompasses a wide variety of issues, but most of it is dedicated to prominent figures of the modern Hebrew literary canon. He published comprehensive editions of the writings of H. N. Bialik and M.Y. Berdichefsky, as well as critical biographies of these two writers. His publications in English include editing the Hebrew literature section of The YIVO Encyclopedia of Jews in Eastern Europe. His latest book is Hayim Nahman Bialik: Poet of Hebrew.
or support indie stores by buying on
Copyright © 2020 American Booksellers Association