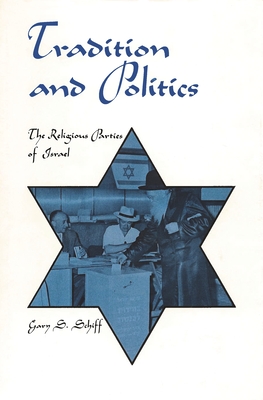 Tradition and Politics is acomprehensive study of the religious parties of Israel. Gary S. Schiff traces the religious parties of the modern state of Israel from their origins in Europe early in the twentieth century to, in response and reaction to the rise of Zionism, their transplantation to Palestine, their adaptation to the new realities, their participation in the quazi-government of the Jewish community under the British mandate, and their unfolding roles after independence. Schiff examines a subject that has long fascinated and perplexed observers of the Israeli scene: the existence of four separate and distinct religious political parties within the Israeli political spectrum. Each party claims to be the one exponent of traditional Judaism; each demonstrates a distinctive political personality based on its historical development and ideological perspective.Religious (traditionalist) parties emerge in reaction to the pressures and predicaments of modernization and help to legitimize modernizing states in the eyes of traditional sectors of the public. Schiff finds the key to the uniqueness of the Israeli parties to be their divergent attitudes toward the relationship between tradition and modernity. After the labyrinthine histories of Israel's religious parties in both pre-state and post-independent eras, Schiff turns his attention to several key religious and state institutions: the Ministry of Religions, the chief rabbinate, and the separate religious school systems, and to some of the controversial issues that have racked Israeli society-for example, the question of "Who is a Jew?" and the controversy over Sabbath legislation. He concludes with an analysis of the special significance of the religious parties in the Israeli political system.