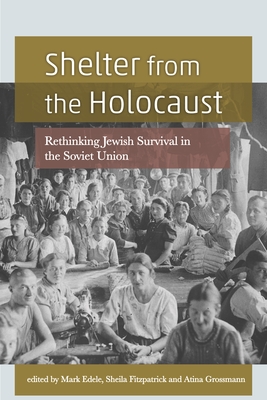 Shelter from the Holocaust (Hardcover)

Life as an escapee of the Holocaust was terribly difficult and often lethal, but it at least offered the opportunity for survival and, therefore, an experience fundamentally different than the systematic genocide the Nazis unleashed on those left behind in the territories under their control. What became of these survivors varies greatly-some joined Soviet Jewish evacuees in harsh exile in Central Asia; some Polish Jews evacuated to Iran in 1942 with the exile Anders Army, moving on to Palestine; most were eventually repatriated to postwar Poland, and many of them then fled further to displaced persons camps in allied-occupied Europe, where they constituted the largest group of East European Jewish survivors. Shelter from the Holocaust addresses these very different paths in seven chapters, beginning with a general overview of migration patterns, including a specific example of postwar memory focusing on those who ended up in Australia. The book continues with an exploration of the diverse ways Polish Jewish survivors talk about their experiences and identity with regard to the Holocaust, and ends with one family's personal narrative of experiences in Uzbekistan during World War II.

Shelter from the Holocaust came to fruition as the result of the opening of formerly classified Soviet and Polish archives, determined efforts to interview the last remaining Holocaust survivors, and the growing interest in the histories of displaced persons and migration. This pioneering volume will interest scholars of eastern European history and Holocaust studies, as well as those with an interest in refugee and migration issues.

Mark Edele is Hansen Chair in History at the University of Melbourne and Australian Research Council Future Fellow. He is the author of Soviet Veterans of World War II, Stalinist Society, and Stalin's Defectors. Sheila Fitzpatrick is professor of history at the University of Sydney and Distinguished Service Professor Emerita at the University of Chicago. She has published widely in the history of modern Russia. Her books include On Stalin's Team: The Years of Living Dangerously in Soviet Politics and A Spy in the Archives: A Memoir of Cold War Russia.Atina Grossmann is professor of history at Cooper Union. She is the author of Jews, Germans, and Allies: Close Encounters in Occupied Germany and Reforming Sex: The German Movement for Abortion and Birth Control Reform, 1920-1950, and co-author of After the Racial State: Difference and Democracy in Germany and Europe.
or support indie stores by buying on
Copyright © 2020 American Booksellers Association