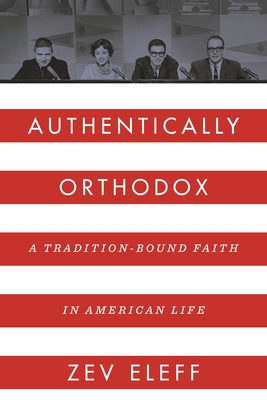 A Tradition-Bound Faith in American Life

With a fresh perspective, Authentically Orthodox: A Tradition-Bound Faith in American Life challenges the current historical paradigm in the study of Orthodox Judaism and other tradition-bound faith communities in the United States.Paying attention to "lived religion," the book moves beyond sermons and synagogues and examines the webs of experiences mediated by any number of American cultural forces. With exceptional writing, Zev Eleff lucidly explores Orthodox Judaism's engagement with Jewish law, youth culture and gender, and how this religious group has been affected by its indigenous environs. To do this, the book makes ample use of archives and other previously unpublished primary sources.

Eleff explores the curious history of Passover peanut oil and the folkways and foodways that battled in this culinary arena to both justify and rebuff the validity of this healthier substitute for other fatty ingredients. He looks at the Yeshiva University quiz team's fifteen minutes of fame on the nationally televised College Bowl program and the unprecedented pride of young people and youth culture in the burgeoning Modern Orthodox movement. Another chapter focuses on the advent of women's prayer groups as an alternative to other synagogue experiences in Orthodox life and the vociferous opposition it received on the grounds that it was motivated by "heretical" religious and social movements. Whereas past monographs and articles argue that these communities have moved right toward a conservative brand of faith, Eleff posits that Orthodox Judaism-like other like-minded religious enclaves-ought to be studied in their American religious contexts. The microhistories examined in Authentically Orthodox are some of the most exciting and understudied moments in American Jewish life and will hold the interest of scholars and students of American Jewish history and religion.

Zev Eleff is chief academic officer of Hebrew Theological College and associate professor of Jewish History at Touro College. He is the author or editor of nine books and more than forty scholarly articles in the field of American Jewish studies. His Who Rules the Synagogue: Religious Authority and the Formation of American Judaism and Modern Orthodox Judaism: A Documentary History were both finalists for the 2016 National Jewish Book Award.
or support indie stores by buying on
Copyright © 2020 American Booksellers Association