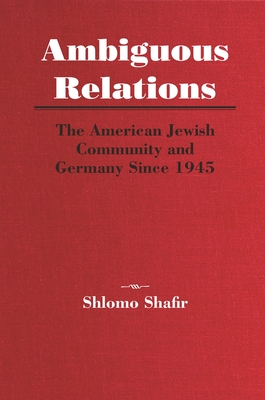 The American Jewish Community and Germany Since 1945

The reemergence of a united Germany as a dominant power in Europe has increased even more it's importance as a major political ally and trade partner of the United States, despite the misgivings of some U.S. citizens. Ambiguous Relations addresses for the first time the complex relationships between American Jews and Germany over the fifty years following the end of World War II, and examines American Jewry's' ambiguous attitude toward Germany that continues despite sociological and generational changes within the community.

Shlomo Shafir recounts attempts by American Jews to influence U.S. policy toward Germany after the ware and traces these efforts through President Reagan's infamous visit to Bitburg and beyond. He shows how Jewish demands for justice were hampered not only by America's changing attitude toward West Germany as a postwar European power but also by the distraction of anti-communist hysteria in this country. In evaluating the impact of Jewish pressure on American public opinion and on the West German government, Shafir discusses the rationales and strategies of Jewish communal and religious groups, legislators, and intellectuals, as well as the rise of Holocaust consciousness and the roles of Israel and surviving German Jewish communities. He also describes the efforts of German diplomats to assuage American Jewish hostility and relates how the American Jewish community has been able to influence German soul-searching regarding their historical responsibility and even successfully intervened to bring war criminals to trial. Based on extensive archival research in Germany, Israel, and the Unities States, Ambiguous Relations in the first book to examine this tenuous situation in such depth. It is a comprehensive account of recent history that comes to groups with emotional and political reality.

Shlomo Shafir was the editor of Gesher, a journal of Jewish affairs published in Jerusalem, and the author of An Outstretched Hand: German Social Democrat, Jews and Israel 1945-1967).
or support indie stores by buying on
Copyright © 2020 American Booksellers Association