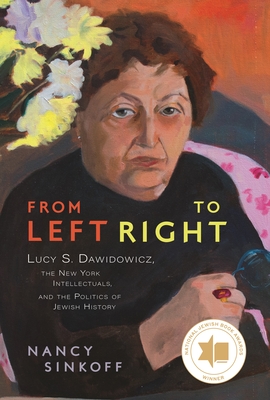 From Left to Right

Lucy S. Dawidowicz, the New York Intellectuals, and the Politics of Jewish History

From Left to Right: Lucy S. Dawidowicz, the New York Intellectuals, and the Politics of Jewish History is the first comprehensive biography of Dawidowicz (1915-1990), a pioneer historian in the field that is now called Holocaust studies. Dawidowicz was a household name in the postwar years, not only because of her scholarship but also due to her political views. Dawidowicz, like many other New York intellectuals, was a youthful communist, became an FDR democrat midcentury, and later championed neoconservatism. Nancy Sinkoff argues that Dawidowicz's rightward shift emerged out of living in prewar Poland, watching the Holocaust unfold from New York City, and working with displaced persons in postwar Germany. Based on over forty-five archival collections, From Left to Right chronicles Dawidowicz's life as a window into the major events and issues of twentieth-century Jewish life.

From Left to Right is structured in four parts. Part 1 tells the story of Dawidowicz's childhood, adolescence, and college years when she was an immigrant daughter living in New York City. Part 2 narrates Dawidowicz's formative European years in Poland, New York City (when she was enclosed in the European-like world of the New York YIVO), and Germany. Part 3 tells how Dawidowicz became an American while Polish Jewish civilization was still inscribed in her heart and also explores when and how Dawidowicz became the voice of East European Jewry for the American Jewish public. Part 4 exposes the fissure between Dawidowicz's European-inflected diaspora nationalist modern Jewish identity and the shifting definition of American liberalism from the late 1960s forward, which also saw the emergence of neoconservatism. The book includes an interpretation of her memoir From that Place and Time, as well as an appendix of thirty-one previously unpublished letters that illustrate the broad reach of her work and person. Dawidowicz's right-wing politics, sex, and unabashed commitment to Jewish particularism in an East European Jewish key have resulted in scholarly neglect. Therefore, this book is strongly recommended for scholars and general readers interested in Jewish and women's studies.

Nancy Sinkoff is the academic director of the Allen and Joan Bildner Center for the Study of Jewish Life and professor of Jewish studies and history at Rutgers University-New Brunswick. She is author of Out of the Shtetl: Making Jews Modern in the Polish Borderlands, of Yidishkayt and the Making of Lucy S. Dawidowicz the introductory essay to Dawidowicz's reissued From that Place and Time, A Memoir, 1938-1947, and co-editor with Rebecca Cypess of Sara Levy's World: Gender, Judaism, and the Bach Tradition in Enlightenment Berlin, winner of the 2019 book prize from the Jewish Studies and Music Study Group of the American Musicological Society.
Loading...
or support indie stores by buying on