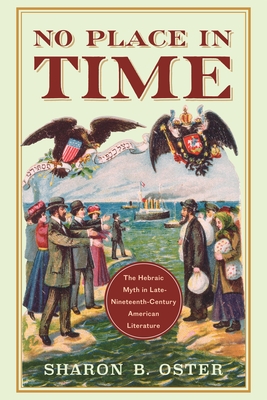 No Place in Time (Hardcover)

By Sharon B. Oster

No Place in Time: The Hebraic Myth in Late-Nineteenth-Century American Literature examines how the Hebraic myth, in which Jewishness became a metaphor for an ancient, pre-Christian past, was reimagined in nineteenth-century American realism. The Hebraic myth, while integral to a Protestant understanding of time, was incapable of addressing modern Jewishness, especially in the context of the growing social and national concern around the "Jewish problem." Sharon B. Oster shows how realist authors consequently cast Jews as caught between a distant past and a promising American future. In either case, whether creating or disrupting temporal continuity, Jewishness existed outside of time.

No Place in Time complicates the debates over Eastern European immigration in the 1880s and questions of assimilation to a Protestant American culture. The first chapter begins in the world of periodicals, an interconnected literary culture, out of which Abraham Cahan emerged as a literary voice of Jewish immigrants caught between nostalgia and a messianic future outside of linear progression. Moving from the margins to the center of literary realism, the second chapter revolves around Henry James's modernization of the "noble Hebrew" as a figure of mediation and reconciliation. The third chapter extends this analysis into the naturalism of Edith Wharton, who takes up questions of intimacy and intermarriage, and places "the Jew" at the nexus of competing futures shaped by uncertainty and risk. A number of Jewish female perspectives are included in the fourth chapter that recasts plots of cultural assimilation through intermarriage in terms of time: if a Jewish past exists in tension with an American future, these writers recuperate the "Hebraic myth" for themselves to imagine a viable Jewish future. No Place in Time ends with a brief look at poet Emma Lazarus, whose understanding of Jewishness was distinctly modern, not nostalgic, mythical, or dead. No Place in Time highlights a significant shift in how Jewishness was represented in American literature, and, as such, raises questions of identity, immigration, and religion. This volume will be of interest to scholars of nineteenth- and turn-of-the-century American literature, American Jewish literature, and literature as it intersects with immigration, religion, or temporality, as well as anyone interested in Jewish studies.

Sharon B. Oster is professor of English at the University of Redlands. Her essays on American, Jewish, and Holocaust literature have appeared in English Literary History and Prooftexts.
or
Not Currently Available for Direct Purchase
Copyright © 2020 American Booksellers Association